Something that got out of hand

Today was my first day of classes in my new program, so I am no longer a NEET (Not in Employment, Education, or Training). Thus, I am releasing the record I kept during that time of my NEET activity. In the 377 days I was a NEET, it became a 601461 word 1949 page monster that no one should have any reason to want to read. It is longer than Infinite Jest and I do not have any words to express the mixture of intense pride and shame that this fact fills me with. Maybe DFW would, but I don't. 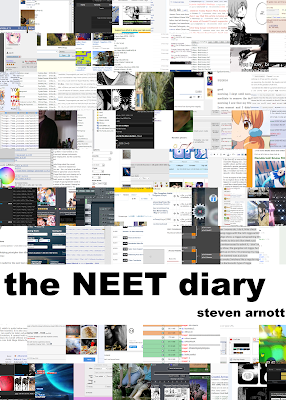 I'm not sure exactly what made me start doing this. I think it was more a feeling of responsibility I had based on the opportunity. I had so few responsibilities and I wanted to write a lot: if I couldn't write something like this, what hope did I have? The project had only two real goals:

1. It should be extremely long
2. It should capture the essence of being a NEET

The former was a disgusting success. The latter turned out to be a pretty stupid goal.

In my mind, the ideal of a NEET was someone who lay in bed all day and watched anime and played JRPGs. If you want, you can cast this as a narrative of someone very slowly and sometimes painfully realizing that such a life might not be totally satisfactory. More accurately, you can see it as a dump of all the thoughts, feelings, ideas, memories, and opinions I had while also having access to a keyboard. When I was at home, I had it open at all times, and would use it for a sort of running commentary of everything I was watching or reading or listening to. When I traveled, I would write in it on my netbook whenever I had the inclination.

I think overall it was a very therapeutic and rewarding process but just as likely it was maddening and a huge waste of time. Either way you probably shouldn't read it.

If you want to read this:

My advice would be to not read it and instead read my recent ebook Hot Summer. This is not reverse psychology or anything. There's just lots of embarrassing things in this diary and I cringe at the idea of people reading it. There were many times when I was writing in it where I'd think "wow, this is extremely embarrassing, why am I doing this, wasn't I planning on releasing it?" and then I'd think "it's okay, this is so huge, it'll just get buried, and no one will see it". But when I was looking through it again while putting it together, I was like "oh, wait, it's all embarrassing stuff". I think it's also very tedious and often nonsensical.

If you still want to read this:

I suggest skimming liberally, jumping around to random dates, ctrl+Fing things that you might be interested in that I might have written about, and frequently forgetting what you've just read. I mean, I still released it because I do think that there is some stuff in there that is worth reading. I honestly think it contains some of my best work, actually. And I think stumbling upon those worthwhile parts after digging around randomly could be a unique and rewarding experience for the right reader. I'm not exactly sure who the right reader is, and I'm pretty sure there aren't too many of them. But they are probably very similar to me. Writing must be, in part, about doing things for people like you. So here we are.

I started working on an index and a table of contents and some other fun stuff (torch-rnn NEET-bot???) that I planned on releasing alongside this, but I didn't finish them in time. I might do a NEET Diary 2.0 sometime later but maybe not. Hopefully Song of the Day will start up again soon. Still working on other fiction projects.
Posted by Keatsta at 5:32 PM

I haven't read very far into "The NEET Diary" (it's so long), but I have to say that I like your style of writing.

To be honest, I was thinking of making a NEET dairy myself, and I came across your one, which is not a bad example.

I'm not a NEET yet, but I almost am (this sounds strange, I know). And I was wondering if I should start a NEET diary? Not even online, just in a book? I wonder if I will just get depressed writing it, or will it be an outlet for my emotions?

Hi hi. Thanks for reaching out to me. I'm glad you're enjoying the NEET diary. For better or worse, it should give you an idea of what you're in for. I think it helped me to articulate my emotions and put them out there. However, I think it started to take over time that I would have used for something more productive. Eventually it felt more like a hypergraphic impulse than something I genuinely wanted to do. Nowadays I'm writing a "work diary" which is similar. I think if I did it again, I probably wouldn't bother, or I'd make it a lot more minimal, more like a normal diary. Now that I'm busy with my YouTube channel and such, I have other outlets for my ideas that feel more substantial and meaningful.

I'd say you should give it a try, though. Some amount of journaling can help to give structure and motivate you. I just don't know if I'd launch into the sort of "as long as possible, at any cost!" project that I went into here.

Thanks again for your kind comment, and best of luck with your NEET adventure!