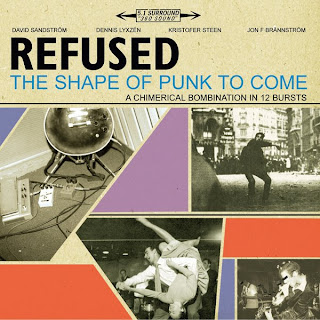 40. The Shape of Punk to Come by the Refused


Depending on how much time you spend on the internet, seeing this album will either make you think: "Huh?", "Hey, that's the album with 'New Noise' on it!" or "THIS FUCKING ROCKS". For you poor souls that aren't squarely in the last category, I present to you the greatest review of this album, and possibly the greatest review of any piece of music or thing ever. It was originally posted on Rateyourmusic.com. In its entirety:

SAW THIS IN A SHOP WITH "THIS FUCKING ROCKS" STICKER ON IT SO TOOK IT TO COUNTER AND SLAMMED IT DOWN AND SHOUTED AT DUDE WORKING THERE "HOW MUCH?" WHEN HE ANSWERED I SAID "NOT THE PRICE DILLWEED, HOW MUCH DOES IT ROCK?"  DILWEED'S ANSWER IS LIKE SHRUG, "I dunno, a lot?" WHICH WINDS ME UP 'COS HE'S BEING A PUSSY ABOUT IT AND I SAY "I WANT IT TO ROCK MY SOCKS CLEAN OFF MY FEET, IS IT GONNA DO THAT?"  AND HE'S ALL LIKE, "Yeah it will." SO I'M LIKE, "YEAH I'LL TAKE IT."

GET IT HOME AND PUT IT ON, TURNING IT UP AND SOME GUY STARTS TALKING TO HIS 'BABY' ABOUT FASHION AND I START THINKING 'WHAT KIND OF NANCY BULLSHIT HAVE I GOT INTO HERE?'  BUT THEN SOME NOISE STARTS HUMMING AND I START THINKING 'WHAT KIND OF NOISE RUBBISH HAVE I GOT MYSELF INTO HERE?'  AND THEN AFTER A MINUTE OF GETTING ANGRY COS I GOT BURNED INTO BUYING SOME ARTSY RUBBISH THE BAND KICK IN ALL JABBING RIFFS AND YELLING TIL THEY'RE HORSE AND I GO WILD, SMASHING UP THE ROOM WITH PART ANGER AND PART HXXXXX JOY.  MAN, THERE'S LIKE A PIT GOING IN MY LIVING ROOM AND IT'S JUST ME AND I'M TEARING INTO SHIT AND THE CURTAINS ARE FALLING DOWN AND MOM'S YELLING FROM HER BED BUT I PRETEND LIKE I DON'T HEAR HER CRIES COS I'M GOING APE SHIT ROCKING OUT AND BEING ALL HXXXXXXCORE AND SHIT.

BUT SOON I'M GETTING ANGRY AGAIN COS, YEAH, THEY KNOW HOW TO ROCK OUT THESE BOYS DO, SO WHAT I WANNA KNOW IS WHY THEY GOTTA KEEP INTERRUPTING MY SLAM DANCING WITH SOME TECHNO BULLSHIT OR SOME QUIET BITS AND EVEN, GET THIS, A VIOLIN!!  I MEAN, I'M THERE ROCKING OUT LIKE I KNOW HOW AND THEN THERE'S THIS FUCKING VIOLIN, AND YEAH, IT'S PLAYING A QUALITY BIT OF A TUNE, BUT WHAT WOULD HAVE HAPPENED IF SOME OF MY CREW WALKED IN AT THAT MOMENT AND SAW ME ALL SWEATY AND BLEEDING AND LISTENING TO A FUCKING VIOLIN???  I'D HAVE TO KILL MYSELF OR ALL OF THEM AS THE SHAME OF IT ALL WOULD BE TOO MUCH.

SO IT WAS TOO STOP STARTY AND ONE MINUTE I WAS SLAMMIN' ROUND THE LIVING ROOM WITH MOMMA HOLLERING AT ME TO TURN IT OFF AND BRING HER HER MEDICATION AND THE NEXT MINUTE THEY'RE SINGING WITH NO DISTORTION ON THE GUITARS OR DOING SOME JAZZ OR SOME SHIT, SO I MARCHED BACK TO THE SHOP AND SLAM THE CD DOWN IN FRONT OF THAT SAME WUSSY MOFO AND SAY "MY SOCKS ARE LIKE STILL ON DUDE!" AND HE SIGHS AND TAKES IT FROM ME WITH NO QUESTIONS AND SAYS, "you wanna swap it for something else or do you want cash?"  SO I WAS ALL LIKE, "CASH OF COURSE, I AIN'T BUYING FROM A SHOP THAT HAS STICKERS SAYING 'THIS ROCKS' ON STUFF THAT DOESN'T."

SO HE SAYS, "you didn't like it too much then, I didn't think you would."  AND I SAID "WHAT THE FUCK'S THAT SUPPOSED TO MEAN? I LIKE SOME OF IT, THEY JUST NEED TO KEEP IT INTENSE ALL THE WAY THROUGH NOT JUST WHEN IT SUITS THEM."  AND HE SAYS, ALL COCKY LIKE "well, Refused made this album to move the hardcore scene on as they thought that it was stagnating and lacking ideas and made for people like you who were all about an image and a particular lifestyle rather than open mindedness and expression.  They did it, I think, but sadly there will always be people like you who were left behind.  I mean, does it get much better than when they come back in after the jazz section on "Deadly Rhythm"?  That bit sounds like a brutal attack, it's insane!  Or, or the violin intro to "Tannhäuser"?  When those drums come in it's epic, really groundbreaking for a hardcore record.  But, if you didn't like it....."

I BARELY GIVE THE GUY TIME TO OPEN THE TILL BEFORE I LIFT IT RIGHT UP FROM THE COUNTER PULLING ALL THE WIRES OUT WITH IT AND CRACK IT OVER HIS HEAD THE PRICK.  THEN I PUT IT THROUGH THE WINDOW AND KNOCK OVER A COUPLE OF SHELVES WORTH OF CD'S BEFORE STAMPING ON THE GUY'S HEAD AND LEGGING IT.  AS I LEFT I HEARD HIM SHOUT "Philistine!"  I'M GONNA GO HOME AND LOOK THAT FUCKING WORD UP TO WORK OUT WHETHER THAT LITTLE QUEER HAS GOT ANOTHER VISIT COMING OR NOT.


Well, there really isn't much for me to say beyond that. It's simply a masterpiece of punk, a groundbreaking yet underground silent riot that turned an ageing genre on its head and shook it a few times. It's smart, like lots of good hardcore records are, but unlike some of their peers, they aren't afraid to hint at their genius occasionally. It's insightful, giving a multi-angeled view of the often all-too easily dismissed anarcho-punk movement. To top it all off, it's Swedish. Who knew they had even imported any anger over there?

It's an album that challenges you to keep up, and then, after you're entirely exhausted and unable to take another step, starts jogging circles around you instead of disappearing in the distance. It's groundbreaking like an earthquake that leaves a million dead. It broadcasts ear-splittingly on the liberation frequency. I could go on all day, screaming its praises, but know this. It fucking rocks.
Posted by Keatsta at 8:00 PM