I've been a huge fan of tactical RPGs like Final Fantasy Tactics, Disgaea and Tactics Ogre for about as long as I've been playing them. I'm sure anyone familiar with titles like these won't need reminding of how addictive and satisfying the genre can be. For those unlucky few that haven't experienced them, TRPGs typically involve training and customizing an army and then battling it out on a grid. Many have combat systems similar to those of regular turn-based JRPGs with the additional elements of positioning, terrain, etc.

This sort of gameplay seems to me to be ideal for some sort of competitive strategic multiplayer game. Success would depend on a mix of both innovative and solid team design and insightful moves during the battle itself. I also felt like a lot of other existing multiplayer games, like Pokemon or Magic the Gathering, had mechanics and strategies that would be interesting to play in this sort of style.

So, at some point last October, I was thinking again about how interesting it would be to play a game like this when I realized that I could conceivably *make* a game like this. Sure, my programming skills were meager at best and weren't relevant at all to game development, but I wasn't going to let that stop me! I enlisted the help of a friend whom I had talked to before about this idea and we hit the ground running. There were a few false starts and some rocky spots, but we've accomplished a lot and I'm certainly proud of how the project has developed.

Right now, Unlimited Tactics (as we've been calling it) is pretty basic. You can make a team of Pokemon (like in ShoddyBattle or Pokemon Online) and do battle with other player's teams through hotseat play or through a kinda tedious "chess by mail" style system (we're working towards true online play, but we'd like to get some indication that people will play it first). You can also put your team up against some challenge teams controlled by the computer. You can make custom maps, but there's no fancy graphical map editor yet, unfortunately. Really, though, I think all of that is pretty exciting, right?

Here are a few screenshots of the game in action. 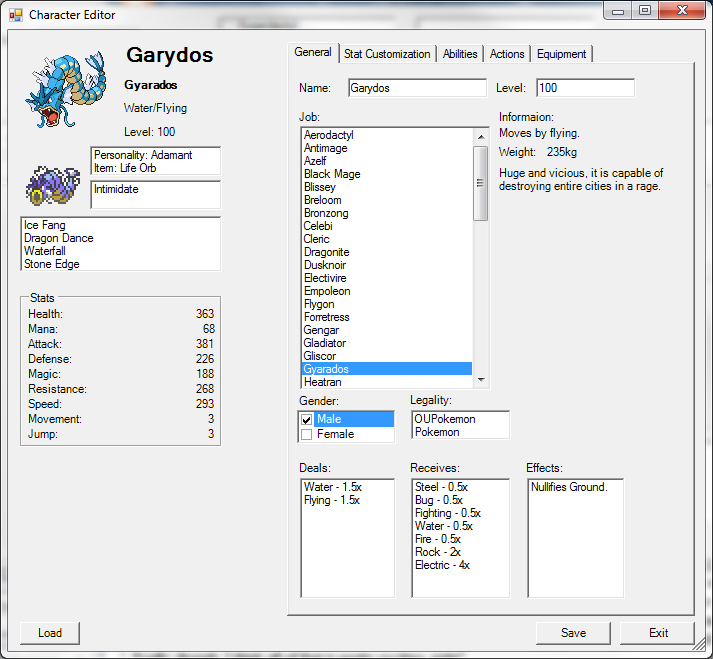 This is our character editor. You'll probably need to open up these images to read the text. Depending on the "job" you select, different customization tabs and options are available to you. 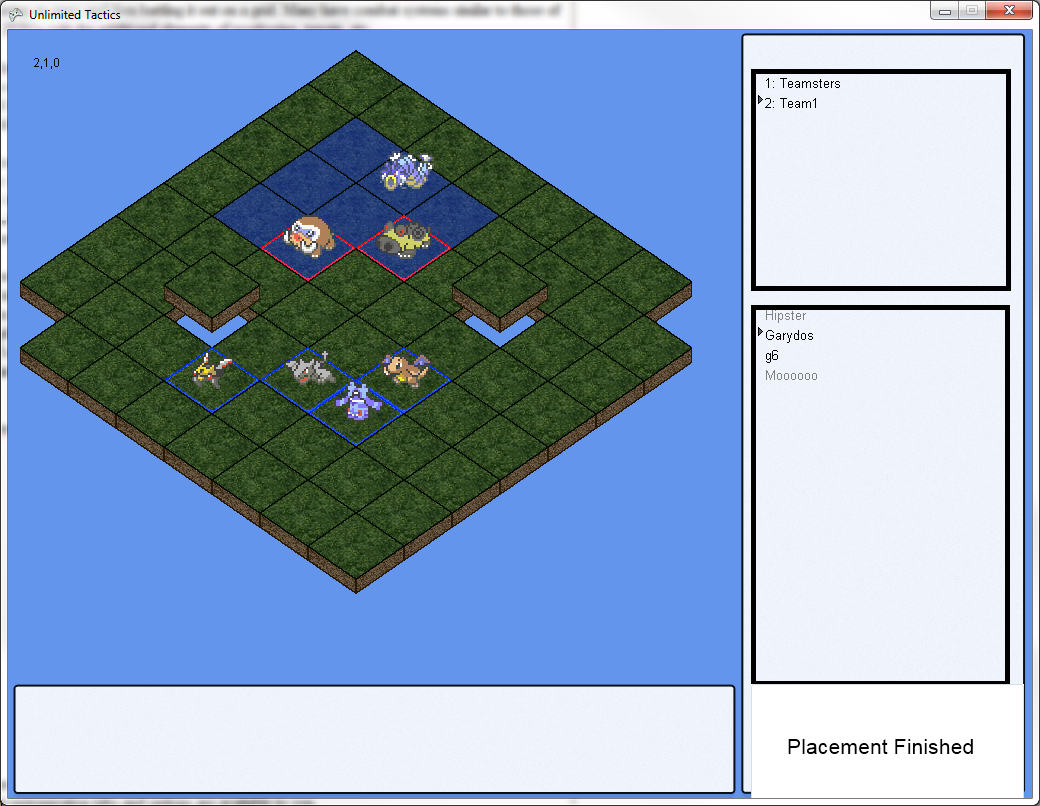 Some of our in-game UI is still placeholder stuff, but it gives you the idea of how it'll look. Just picture it prettier. In this shot we're placing down the two teams. 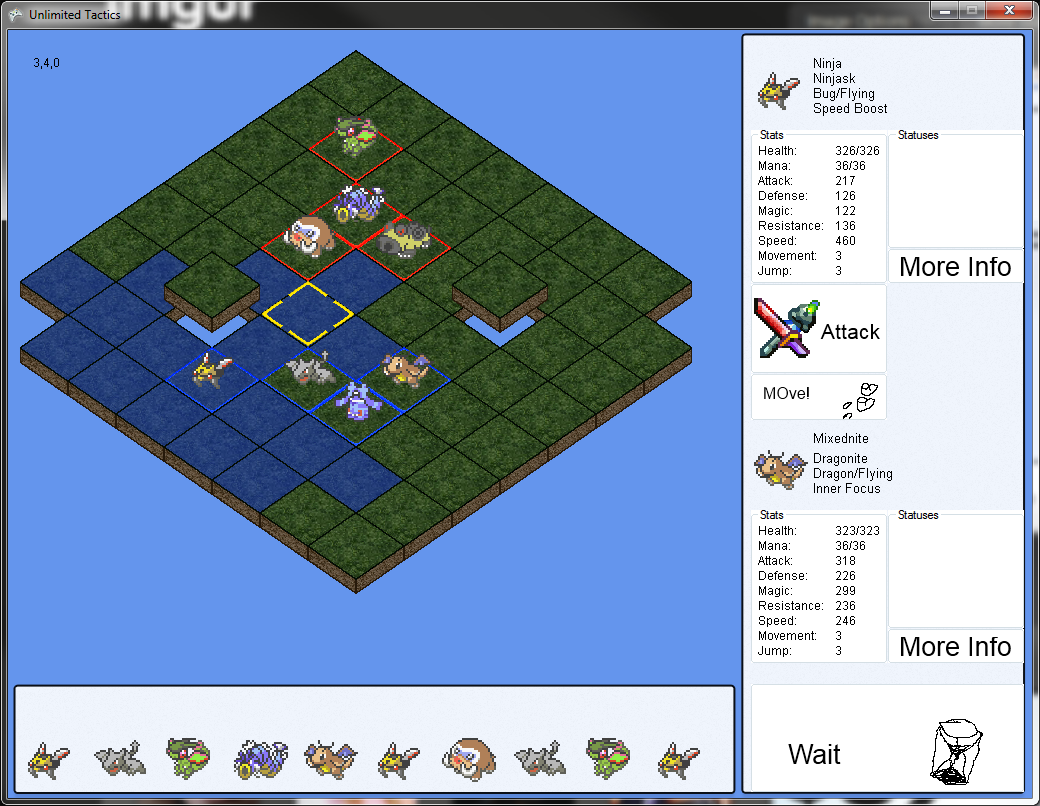 Here we're choosing where to move Ninjask to. More shabby-looking UI stuff, but I think it has charm. We show the order in which characters are projected to take turns along the bottom of the screen. 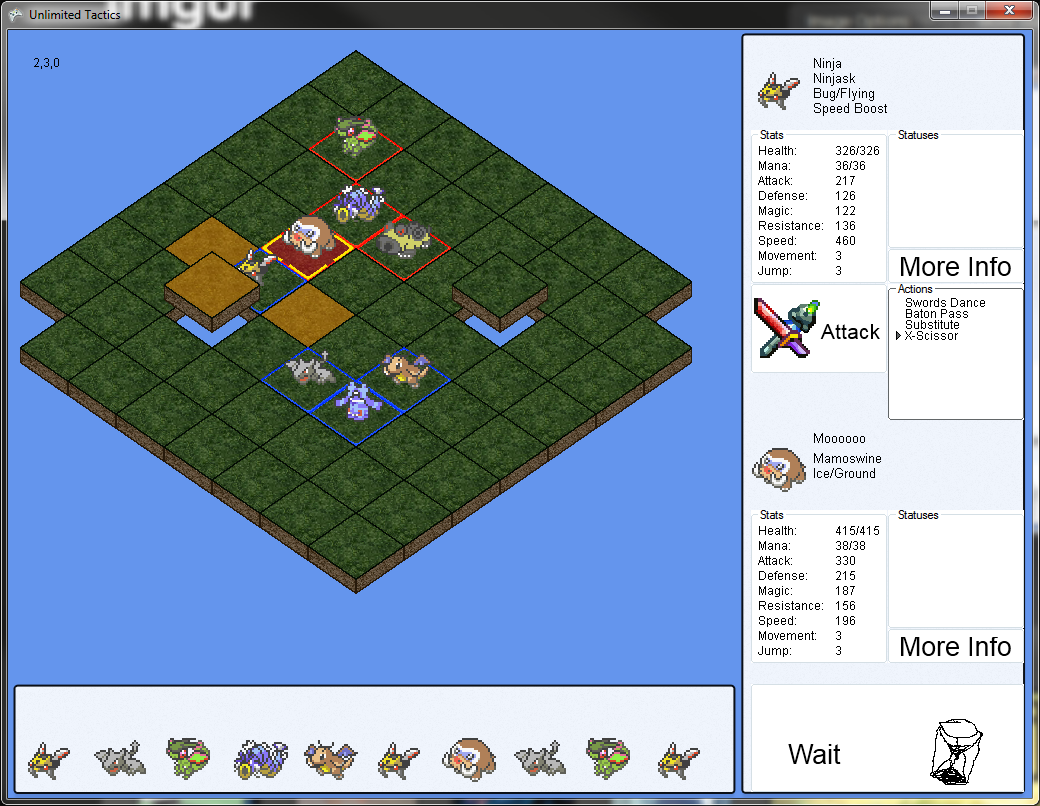 Here we're choosing where Ninjask will attack. The orange squares are the valid range, the red ones are squares that will be hit based on the current selection. 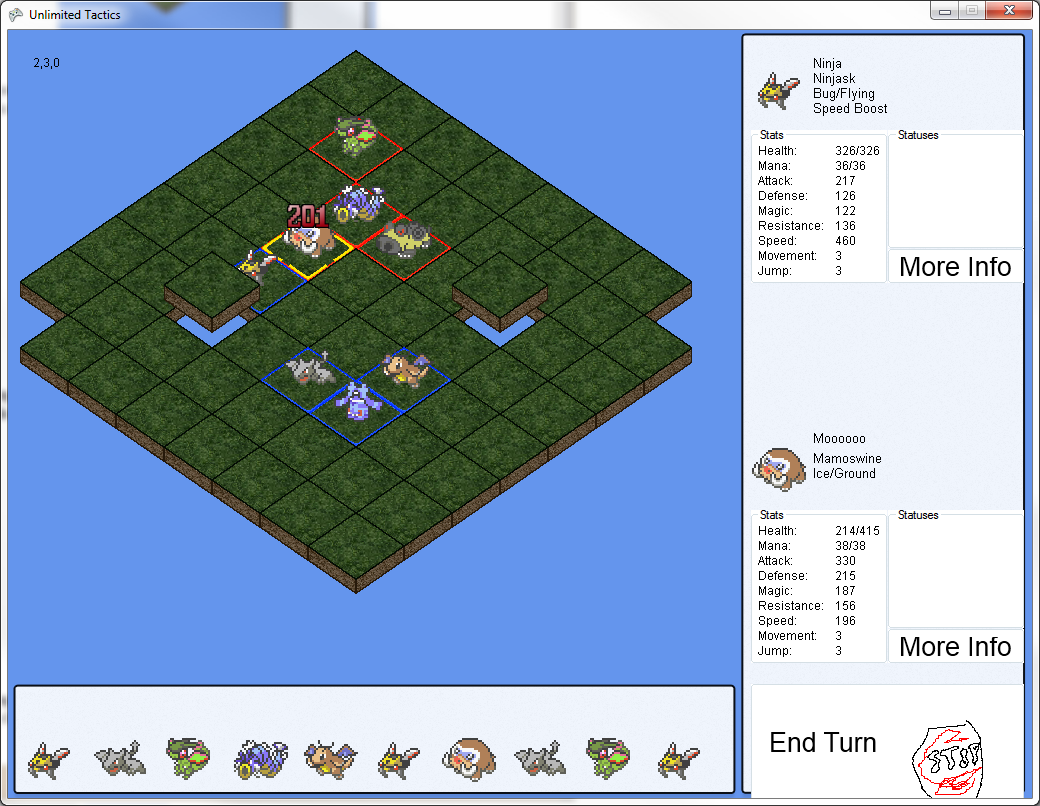 We even have the damage pop up! This was one of the most exciting things to add.

That's about all I can show you in terms of interesting screenshots, but I hope it gives a general idea of how the game would be played. Sometime soon I'd like to record a short trailer.


How you can help!

One thing you may have noticed is that our artwork is somewhat lacking. This is one area where both of us have little expertise and so far we've just struggled through with tedious MS Painting and ripping sprites from other games. That's gotten us about as far as it can, though, which is why I'm reaching out to all sprite artists for content. Since this is all about making the ultimate tactical mashup, we're not too picky about what sort of artistic style you use or anything like that (it can't be much worse than my hand-drawn zombie sprite). In the short term, we need sprites of archers, knights, mages, all those staples, but really, we'd be open to pretty much any profession or character you can think of. If you think it'd be cool to have in our game, we might think so too. We'd also like some more variety for our tile types outside of grass (although you have to admit that our grass does look quite nice), so if you want to make some of those that would be great too.

This is the grass tile itself. I think the easiest way to do it would be just to draw your stuff directly on it, but I'm not an expert. You can use it as a reference to see how the sprite will look in-game, at least. You can email your wonderful creations to keatsta@gmail.com, post them in the comments or hand me a printed out picture of it (colour laser only, please!) in person.

How helping us can help you!

First off, you'd have our undying love, which I'm told is quite a nice feeling to have even when it's just the love of couple of nerdy college students. On top of that, we'll definitely credit all who contribute things we use in some sort of in-game credits screen, along with whatever readme.txt file we package with the game. We'll let you include any sort of message you want along with it, so you can advertise your blog to whoever actually reads readmes and credit screens. As far as financial compensation, I really can't make any promises. Actually charging money for this game is pretty sketchy as far as legality goes and not really something I want to do, but we've been considering signing up for a funding site. I guess all I can say is that if we end up millionaires or something, like the next Minecraft or whatever, I'll do everything I can to make sure those who have really helped us out come out alright as well. And then I'll wake up from that wonderful dream.

When can I play this?

Soon. Well, hopefully. After we get a few more features ironed out, I'd be ready to call the game "ready" for some sort of alpha testing phase. However, we'd like to have a lot more content available before that happens, mainly in the areas of characters, missions, etc, and when exactly I'll feel like the game has enough stuff to entertain people until we have enough stuff to update it is pretty unclear, even to me. I guess all you can do is keep reading my blog every day to find out!!

Seriously, though, if you're really curious about the game and wouldn't mind helping us test stuff on different environments and what have you, we might be able to hook you up with a special "pre-alpha" build. I can't guarantee it'll run or anything, though, nor can I guarantee I'll be able to spend much time helping you run it right away.

That's about all for now, I guess. I hope you look forward to our game! Thanks to anyone considering helping us out!

I love Pokemon, and I love this idea. I wish I could help you guys, but unfortunately, my spriting skills are non-existent.