Recently my blog hit TEN THOUSAND VIEWS. This is a pretty big milestone.

I know “real blogs” (i.e. blogs read by people without cohesion or due to personal relation to the blogger) get this sort of count every month.

And then “popular blogs” get this every day.

And then there’s sites that get that every second. I think. Too lazy to figure out if that actually makes sense.

If I was to do this list now I probably I would try to write something for all 50 albums and then never do it.

But if I did do it I probably would rank the albums like this for the top 10:

Holy wow that was a good year for music.

-There have been 198 published posts on this blog, not including this one. If I was more on the ball I would make this coincide nicely with the 200th post but oh well you can’t force this sort of thing.

-Given 4 years that means I post about 50 posts per year which is almost one per week, I am pretty happy with that. Granted it’s not anywhere near actually once a week, given huge periods of downtime and then times where I was making several posts a day, but whatever.

-I was gonna try to summarize my audience page but I figure I might as well just screencap it: http://i.imgur.com/Ir61A.png
None of it is surprising at all really.

So what the heck?
I can explain all of these I think.

10. I linked this on /mu/ right after I wrote it which was still when it was getting a lot of attention there.
9. I linked this on /r/davidfosterwallace when I wrote it.
8. This seems largely due to the loads of images and people looking for information on the Madokami figure. I’m still not entirely sure what happens when you host an image on your blog in terms of how it shows up in Google Image Search, but I know that it does, somehow and in some contexts, and this makes it very popular. An image really is worth ten thousand words. As far as the Madokami figure goes, it’s coming out in November but we probably won’t see a painted picture of it until Summer Wonderfest. I guess they’re trying to coincide with the hype about the movies, fair enough. Here’s another picture.

It’ll cost more money than anything but we’ll all still have to buy one! Then there's also this garage kit that you can feel good about never ever owning: 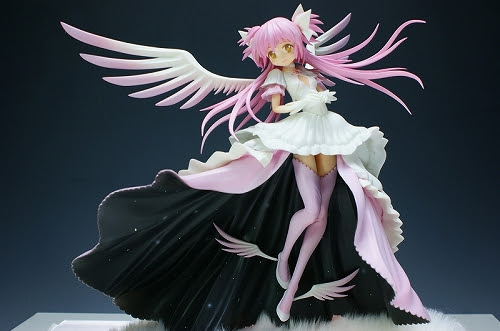 7. I linked this on /r/smashbros and I think GameFAQs too. It is riddled with untrue facts and inaccurate assessments. In my defense (or further condemnation) I didn’t actually look anything up.
6. It seems like a lot of people search for album names with the domain blogspot looking for a download. Sorry to those people! At one point I was going to make this a music downloading sort of blog but I dunno laziness the main factor I think.
5. This I linked to on /r/gamedev, where people pointed out that spriting was like a million times harder than I was thinking and no way in hell is someone going to do that for free. True! I tried spriting stuff myself soon after and yes, it is indeed very hard!
4. I linked this on /r/TAS and I think a few people tweeted it and such. I really ought to put together more TAS lists for people interested in watching the classics or whatever.
3. I never linked this anywhere, it just got a lot of google attention. I probably should do more “best songs by an artist” lists, they are fun.
2. I posted this on /r/hipsters where my roommate left a very long reply.
1. This again is due to some mysterious property of images and Google image search. The pictures of haircuts got (relatively) tons of hits and I am really at a loss to explain why, since I got all of those pictures off Google image search in the first place. I can understand fully why most popular blogs are eager to put as many pictures as they can.

Other traffic sources
-People Googling “centipede hz leak”: I am sorry folks, you are being way too optimistic. Not even the album art has leaked yet. Or has it? I gotta check again one sec. No it hasn’t. But there is a bunch of other info out there now, Domino has released a sort of “press statement” which talks about instrumentalists and the fact they got a children’s choir (!?!?!?) in for a track, and that one of the tracks is Deakin-driven, which is hugely exciting.

-People looking for reviews of a few albums: My “live reviews” have all been pretty popular, some even got “tweeted around”, so I’ll probably keep up with them for hype new releases. Getting in first/early seems massively important.

-Other times I’ve linked to posts on reddit: I think I’ve linked a few other random album lists and such on there before.

-Links on my profile and such: I have this linked to in most of my forum signatures and such, that adds up a little.

-The meme: So uh the url of this blog (which was really a poor choice btw but now I like it a lot and I’m gonna stick with it) comes from a Mountain Goats lyric off the song “The Last Day of Jimi Hendrix’s Life” which I was really big into when I was making the blog obviously. It hasn’t done me any favors but I guess I don’t know how it could. The title of the blog comes from a meme that was really peaking in popularity at the time and I really enjoyed it. I can’t claim to have created it but I did spam the hell out of it on 4chan trying to derail threads, usually in /mu/. What can I say, this is how I rebelled as a teenager.

Anyways at some point someone added it to the knowyourmeme page on the meme, I still get some hits from there. And occasionally people will google something to do with it and find my blog and probably end up disappointed.

Especially the guy who was googling "breathing manually all the fucking time i want to die". BROTHER, YOU REMAIN IN MY HEART. I hope you found a solution.

How to stop breathing manually

This meme eventually spawned a lot of other ones like “You are now aware of the weight of your jaw” and “You are now unable to put your tongue in a comfortable position” and stuff like that. Also closely related to the “Stop jiggling your leg and get your left hand off your face” and such. So the meme usually posits to know something about you that you are unaware of and then makes you hyper self-aware. That’s kinda neat. But the other way to take the “breathing manually” thing is that it actually changes something about your body. Some switch is flipped when you read that.

This is a more interesting way to think of it for me. I like the idea of “mental backdoors” and such, ideas of the human mind being malleable in such a way that any desired output has a conceivable input that doesn’t necessitate anything beyond some specifically worded suggestion. Somewhat paradoxically I like this idea because it seems to me to suggest some of the “sacred nondeterminism” I still look for in the cognitive realm, instead of the pure determinism it actually suggests. Mainly just because it’s so mysterious and relates somewhat with the idea of “transcendent art” and sort of “hyper emotions” that go beyond the limits of chemicals. Stuff like the video for Radiohead’s “Just”. I find it all very cool.

Not that I actually believe it, though. I know anatomically that there’s nothing you can do through words to make your conscious step in to take active control over your cardiovascular. So if you do find yourself breathing manually, the first thing you should do I’d say is to try to become really acutely aware that it is just an illusion.

If that doesn’t work, either because you can’t convince yourself of it or because your body is able to maintain the paradox of knowing something is fake and believing it nonetheless, which is certainly a possibility, maybe you should just try reading the words YOU ARE NOW BREATHING AUTOMATICALLY.

If that doesn’t work I’d try going to sleep or getting drunk.


WELL THAT CONCLUDES THE ABSOLUTE MOST BASIC POINTLESS SEO101 LESSON EVER


What’s next for this blog?
Oh man, where do I begin? Probably by making posts. This is a weird situation where on one hand I have what might be the start of a legitimate academic career in writing starting soon and on the other I feel insanely unproductive and uncreative about writing itself, even on pointless rambling blog posts. And on some third neglected stunted hand I have the responsibility of finding some short-term summer job so I don’t uh starve to death before scholarship money comes in, which is not only basically the most unpleasant thing ever, a continual challenge to make myself look super-capable in the face of a nonstop wave of failure.

OH WELL. If I do make posts in the near future they’ll probably be on:
-New Sigur Ros album
-New Spiritualized album
-Parks and Recreation
-The Eric Andre Show
-Kirby: Return to Dreamland
-The Legend of Zelda: Skyward Sword
-Lone Wolf and Cub
-E3
And sometime hopefully:
-Top albums of 2011
-Top anime of 2011