aka [] ^ ___ ^ []
At least that's what my download has the album tagged as. Not really sure what's going on here... So Big Baby Gandhi said he was like, quitting rap, but that he had one major release left that would come out sometime early 2014. But then it showed up on his bandcamp briefly, or something... But it shouldn't have? And was taken down again? Anyways I don't really understand if anyone ought to have this yet, but I do, and I can't resist listening to it. I love this guy, been a big fan of his ever since I first heard "Gandhi Mandhi Mandhi". Big Fucking Baby was a solid mixtape, and I thought NO1 2 LOOK UP 2 was even better. Now we got the proper album, how could I not be excited?

Unlike the hilarious dollars-cereal cover of N12LU2, this one has the baby looking pretty serious and contemplative. His music's always struck a good chord between being able to speak on serious stuff and also drop hilarious lines without either seeming inauthentic. He's kinda like a less fucked up Danny Brown, and he has Danny's sort of frantic flow too. He gets these weird ass beats and just murders them, I think my favorite recently was Hot Sugar's ultra-minimal but still somehow very mysterious "Blessed". Really talented guy. Shame he wants to stop, but whatever, that's his prerogative. Anyways let's get going with this. 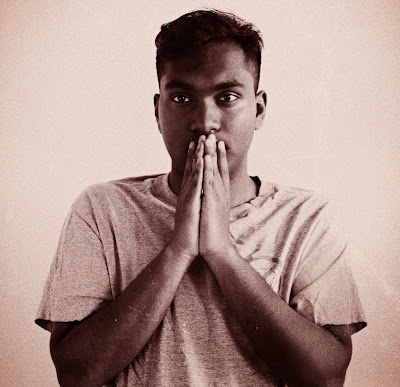 1. "Not Like Me"
Already we get some pretty unconventional sort of beat setup. I gotta look up production credits later. Wow what a twist, just your shadow, just you. "I take the bus like a real G" yeaaaaaaaaaah I feel you. This is some real real shit right here. Tao Lin levels of authenticity. Wowww I like this choral sorta vocals. And his flow here is solid too, this pattern. He used to do this thing where he just frantically rapped all over the beat, now he's throwing in more pauses, really solid. I like these beats on the outro. Alright great solid start. A+

2. "Native Sons"
Another really solid electro organ thing... now some weird samples... Gandhi coming in on a pretty slick flow. This seems like a pretty serious business song. Wow he's like, sorta singing on this hook. Slick as hell I love it. This sort of lifestyle depiction... TV raps lol. I have a hard time quoting lines like this 'cause every time I start he says something even better. Man okay I think I understand the message of the song... but I don't think I can articulate it clearly yet... We get bars about his life, pop culture... Very compelling. Has that sort of Tao Lin thing where the authenticity makes it compelling. Wow this outro. "Wish I was Illuminati/my mom shouldn't work so hard/she way too good a person"... damn... that's nice. A+

3. "My Maybach"
Lol, rapping about writing raps, sure, makes sense. "Catch a lick like post office" "When the album drop go support it" yeah I should I will. I love this beat with the piano beats... I love how he's doing the hook here, layering the sorta melodic with the straight rapping. "Fuck em" repetition flow, I like it. "Most time thinkin about what to purchase", his sort of... self-loathing but acknowledgement of materialism, I love it. I like his 'pac impression. "Could count all the people that love me by counting on one finger/Could count all the people who hate me by looking out the window", "You got me? Like Brenda", and other great stuff... damn. "A lotta cats think they so G/They Lil Bo Peep" lol. This is like... some sorta weird Earl Sweatshirt song, almost, lol. A+

4. "Black Lipstick"
I like these sort of alien sorta sounds... what's going on in this intro here, what is it she doesn't know. Wow yeah I like how that beat changes and stuff there. His flows are really good here. I like the rhythmic contrast on the vocals around :55ish. This is a sort of R&B banger sorta thing with also some fast rapping, and damn that's some good rapping wow. This structure is pretty unique, pretty cool. Wow this whole verse about a good ass, wow, beautiful. Wow hilarious... moving? Nah I dunno. This outro is solid too, those "space horns". S-

5. "Roll Call"
Wow lol what is this beat? Is this actually gonna be a beat? Haha yes. "Bad bitch contest/You could make 3rd place" lol he does these sort of "reasonable compliments" sometimes and they crack me up. This whole song is basically about butts. Wow okay this verse about someone lonely at home listening to this naked and alone... 2 close 2 home. I love the "water sound" at the end of the "whistle sound" on the beat. I like the "stark" drumkit at the end. This is fun. A

6. "Green Card"
Pen scratching sample, that's hype. Lol this intro in general, writing a letter. This beat is solid as hell, "YES WE GOT THAT GREEN CARD" lol what a hook, this is awesome. I love this flow, the way he's speeding up. This situation seems very... I dunno what the word is, endearing maybe. "Working really hard, working working real hard", "Now we got the juice like Jose Canseco" lol. This beat is super addictive. And this outro... lol, awesome. Classic Gandhi sorta flow. S

8. "Tru 2 Da Game"
Woah I love this beat, this low-rez sorta feel. This sort of flow really appropriate for this sort of daily life storytelling flow. "If I was you I'd murder me", lol. I love this hook, this multi layer vocals sounds great with this sort of 8bit chord sorta beat. "D-ho can't hold me back", what is that? Just verse after verse of really varied nice flows. "I'm an idiot", Greedhead classic line. Wow yes pls just vibe out that beat for ever. I love it. S-

10. "Somebody Else's"
Daaaang this is nice, "I wonder if God could make an ass so big that he couldn't even lift it", haha, oh man, all these lines are hilarious. This sort of laid back flow is beautiful. "Best advice: live your life", said to a guy getting NTR'd by the Gandhi. "When that ass clap, do that ass make a sound?". Lots of moral flows here... always coming up with a good middle path. Like, this song is like 50/50 between serious moral introspection and talking about butts, who else but the baby? A+

11. "Savvy's Song"
First features of the album here... I like Tecla, I dunno who Savvy is. Another good beat, I like these laid back flows with real talk lyrics. "Do I hit the streets running and become a thug/Or swing from a pole in somebody's club?", real shit. This is so vibey, the "rolling/rolling" part, I love. "My neck free from the glamour and glitz, that's Django", I like it. "I'm from Queens/All our dads' got mustache" lol. "Plus your girl got no butt like Catdog" loool. S

12. "IDRC (ALAIWU)"
I dunno what this stands for... I don't really care? A lack and I will unite? Heavy piano driven beats are some of my favorites. I just keep waiting for a line with this acronym lol. haha yes called it. "As long as I'm with you" awwww, how sweet... Such sentimentality. Haha all these twos and the "two chains on my neck/Wait haha no that's not me". Man I didn't expect this sort of song on here. Actually there's a lot of stuff on here that I didn't really expect lol. This is like... whatever. Not the sort of thing I listen to. I'm happy he's happy though I guess. A-

13. "Boomerang"
Geez I love these synths I can't get enough of them. "Been two weeks since I brushed my teeth"? Is that right? That's not good. "Muslim but no bowtie", lol. "Much handsomer than I am in my press prints", "Expressing myself honestly never hard for me", lots of great stuff like this. Love Bjork, yeah, like on Hyphy Ballads, "Plus you can tell she do mad drugs and if she don't do mad drugs she realer than life" lol. I really like this beat. Okay I guess that's it. S

That was pretty alright...
I dunno, not really what I expected. The beats were like a more refined, less sample driven Big Fucking Baby... was it all self-produced? That's really good, really impressive. His flows were really impressive too, but... I dunno, where was the energy? Like, it lacked the sort of really over the top rampaging sort of flows, stuff like his verse on "Blue Magic", "Boogie Nights", etc... He used to pull that stuff all the time, that was like, my favorite thing that he did. Now he's singing on hooks and stuff. Strange.

Thematically it's really interesting. Lots of clever lines as usual, looking forward to unpacking them as I listen to it more. He seems uhh pretty disillusioned. Lots of self-scrutiny about materialism, things like that. Really sounds like a rapper who wants to quit. Classic subject matters of "being the best rapper", "hoes on my dick", "rich as fuck" are all deconstructed through admission... And it's cool, there's a duality of acknowledging desires without falling, like, victim to them. But at the same time, it's a sort of insular attitude. I feel like most guest appearances wouldn't make sense on an album with this focus. And the density of just straight up hilarious lines seems lower when it's all through a sort of srs-biz introspective lens... I mean, the bottom line is like... he doesn't feel like he's having that much fun on this album.

Which is fine... he's developing as an artist. And the sort of energy he had on his tapes... you can't fake that, and I'd much rather have this than have him try. Interesting contrast between this and Wild Water Kingdom... Heems seems to be going through similar shit but a key difference is that Gandhi wants to stop doing music while Heems wants to keep going.

Well whatever... pretty interesting stuff. Doesn't have the same sort of raw kineticism that made his previous releases so addictive, but I dunno, it'll grow on me maybe.
Posted by Keatsta at 9:44 PM