What I mean is that... for basically no reason, no continuity with previous events, he just pops out of somewhere and solves all the problems. It's not like Death Grips or apparently Beyonce where they drop an album out of the blue, which, although exciting, sort of creates new problems, like, how do I deal with this or whatever. Burial gives like a month's notice, says it's coming, and then it shows up, and you don't really have to deal with it or rectify it with your current mental state or... I don't really know what I'm saying.

Basically Burial is GOAT-tier for you, right?

Yeah, yeah. And his music has just an overwhelming godliness of atmosphere... There isn't really being "in the mood for Burial". Like, a lot of talk is about how Burial is just perfect for cold, rainy nights, wandering alone downtown London... but it isn't so much that that's when you should listen to the music, but when you listen to it, there you are. There's entire dimensions of emotions and aesthetics encoded right into the music. Anyways here let's take a look at this new one. I'm pretty excited. Pretty much his entire discography has never fallen out of my rotation since I heard it. 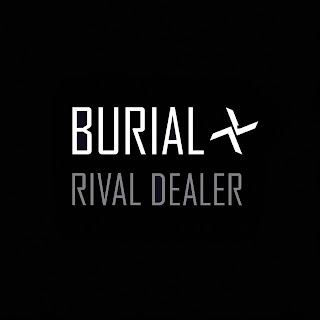 1. "Rival Dealer"
Very atmospheric beginning, radio static, I love that sound... some sort of breathy stuff, and then... "I'm gonna love you more than anyone", wow nice. I love these staticky things. This is very busy. And then wow this beat is so fast, so aggressive, HOLY COW, I love this. I love the little skip. Gonna be saying "love" a lot this time, nothing else works. And then we fade back out... No seriously the way this beat works is just insane, it makes me want to go crazy, like, physically crazy. Wow I love how he changed the cadence on the sample. This is so cool in the relentlessness, every time I think there'll be a transition it just POWERS UP. And now that sample is more frequent, such a good technique of escalation. It just sounds so... cool, I don't know how to describe it. Like if there was a fighting game that was way cooler than any fighting game that's ever existed this could be the soundtrack for a combo video for it. Hmm at 4:00 there seems to be... I don't know what that guy was saying lol but it was a good effect. At 5:00 there's another sample and wow that really aggressive industrial sound. "I have chosen you, disciple"... eerie. I love these harsh electronics with that crisp but dark beat... this is really the stuff only Burial makes. "You know my motherfucking style" haha awesome. Spray paint rattling sound, cool... so many cool sounds... the buzzing panned to the left has an East Indian sorta vibe somehow... But these grindy sounds with this beat, it just works so well. This is insane. How is this so good? 7:20... another major change and then oh man when he works with vocals with that really airy oooooooooh yes... this is the sort of stuff he does that I love the most... sacred, soft, cathedral stuff... and oh man the sharpness on that vocal sample. jesus oh wow. the piano effect... that's like nothing else and oh man the little cricket chriping sound... this is just way too much man lol. "This is who I am"... and then a horn? Or a voice? This sort of... tone where it's super pure, and echoing, and yet... still has some sort of implacable grime element... this is true street spirit. I dunno what this voice is saying at the end but I love it... gotta listen to this 5089483 more times. "Come Down to Us"... hey that's the other song name! But oh wow. ****

2. "Hiders"
Shorter one... Wow this piano... and the rain... lol what sort of atmosphere is this? This is insane. This is like... almost a vaporwave approach... with a totally different aesthetic like WOW when those piano chords got louder, that is a really really great effect. Wow I can't get over the dynamic and tonal range here... This is like, full-body music. HAHA WOW, and then the beat comes on... "You don't have to be alone"... HAHA NO WAY, THESE DRUMS, haha, nostalgia for the unremembered 80s, lol. Again this sort of vaporwave approach lol. I love it. The rumbling, the mysterious noises... all of this... the wind... and then this voice again, "Come down to us"... hmm... intradesting... This outro is really beautiful, I love the vocal effects here. **

3. "Come Down To Us"
More breathing... "Excuse me, I'm lost"... I wonder if it's from MGS again lol. wowwwwwwwwww I love that tone there, so echoey and full, the sort of thing we really strived for in choir. Hmm sort of a sitar sound here, interesting, I love the way this is filling up. Again this sort of piano + beat... I don't even know what sort of aesthetic I'd describe it as but it seems so warm and nostalgic... Like old Final Fantasy music lol. I love this steady beat, a real feeling of like, going forward into the night, or something... towards the end of the night. "Come down to us"... what is this referring to, I don't know, I'm so intrigued, so compelled. Said and then sung? It feels somewhat triumphant, the way the beat just plods ahead. OOoohhh I like how that other beat comes in, and then all this static, just such pure wall grey, lots of crazy space sounds... "Don't be afraid to step into the unknown"... um, okay, I trust you. Almost a BoC sorta vibe here. Haha yeah I believe that doubly after that one vocal effect there. The transitions around these beats are so solid, it's really hypnotic... I feel like I'm barely aware... The vocals seem so tragic, and yet so triumphant... I don't even know how to describe it. There's some paradoxes at play here... Major transition thing happening at around the halfway point, makes sense I guess. All the way down to silent... lots of sort of whining stuff... Oooh yes haha wow a record scratch? For real? This beat... man... I really can't describe. Wow that "shaking" sound in the back, holy shit, that's so cool. WOW, WHAT? This is crazy. I... I can't even describe is what happening here. "So I ran away... just to be me"... is that what it said? These drums too... I don't really know... it's all so beautiful. Like, I keep thinking "vaporwave", like, just, this transcendent angelic version of the vaporwave appropriation aesthetic. Wow... and then another sort of transition break... Wow yes... this is like, just the etherial parts added to the vaporwave stuff "You are not alone" and then whoooph, everything comes back full force. That's so powerful. This is such a triumphant, emerging into the light sort of feeling. "You are not alone"... then almost total silence... just vinyl scratches... street sounds... Ahh, I heard about this part... people just talking, I didn't realize how... wow this is such a powerful effect, very moving. This is the voice that was talking throughout, I think. Man though that was great. ****

Burial basically "does it again"

Which is almost at this point unfair to say, I think. Like, when an artist becomes this consistently amazing, it feels like praising them for consistency is almost like... uh, I dunno. It doesn't drive the point home. Because the thing he's done again is like 1) make me reconsider what he's capable of a musician 2) make me reconsider what music is capable of, period... It's not really a... whatever, you get my point.

Thematically I think this is one of his most interesting releases to date. I had seen some "rumblings" on /mu/ or from friends or whatever about transgender issues being addressed on the album. Even stranger, Burial released a statement, which he basically never does, to the effect that he wanted the songs to be like, an inspirational anti-bullying method. This struck me all as really weird, 'cause usually I view Burial's music as like... so emotionally overwhelming on their own that I'd never like... uh, I don't know how to put this. Like he seems to have a lot of songs about loss, and such, but I'd never think that Burial's music is there to console you in times of loss. Like, the emotional qualities of the music itself are such that the context is... almost basically irrelevant? But that isn't quite true either.

This is a very hard thing to articulate. Basically I find that contextualizing some art with my own emotions is sort of pointless or irrelevant, that the art itself is so emotionally impacting that to think of it as being "for" you in anyway, like, being "for cheering you up" or "for when you're sad" just seems... devaluing somehow. I'm not sure if I'm making any sense. Burial was like that for me, though. When, like, there's that part of just sheer ethereal beauty in "Truant", or the heartbreaking "you look different" line in "In McDonalds", it never felt like Burial was doing that to make me feel happy or sad or whatever, like, it seemed, uhh... "too good" for that, I guess?

Anyways my point this that this message from him I found very interesting, and these transgender stuff especially, it's so like, specific and pointed, so focused, it really seems like a deliberate effort to allow someone to have some sort of personal response and benefit to the song. But it doesn't seem cloying or anything, either, like, it really seems like something that, if you can identify with it, will become very moving and inspirational. Which... is completely beautiful and amazing and oh my god Burial is so GOAT tier. I don't know if I'm making too much sense. Anyways this whole thing was just wow oh man wow.
Posted by Keatsta at 8:32 PM