Lakutis has always been somewhat of an enigma. I first heard of him when he showed up on Das Racist's top-tier mixtape Sit Down, Man, doing verses on three songs. At the time I think I thought that was like "overkill" for a group usually pretty scant on guest features, but I was pretty quickly addicted. Back then I was mainly into "cleverness" in lyrics, which 'kutis dealt in spades. Stuff like "Wait, are you able to give of the flesh like Abel do? Not able, Cain'll do" and "OG commander of the starship, Pike before Kirk" from "Amazing" made my jaw drop.

On his excellent EP I'm in the Forest he started really coming through with a really bizarre and unique aesthetic... really over the top horrific imagery that, mixed with his dense and hilarious "reference game", became somehow both really depraved and really intellectual, both accessible and abrasive. "I'm in a coffin, it creaks like Dawson", like, who even says that? Or just straight up ghastly shit like his verse Steel Tipped Dove's excellent "Owlsley": "All I see inside my head dead bodies", "Crack my skull, crows fly out". This gets taken even further when he references some sort of horrific imagery that he himself has invented as if you could know about it - "Y'all know about the seven spiders of hip hop?". Hilarious, disturbing.

Anyways, now his first proper album type thing is out, pretty exciting. It took a loooooong time. Everything I've heard from it has been fantastic and it seems like he's only become more able to experiment and refine since the first EP. So here we go! 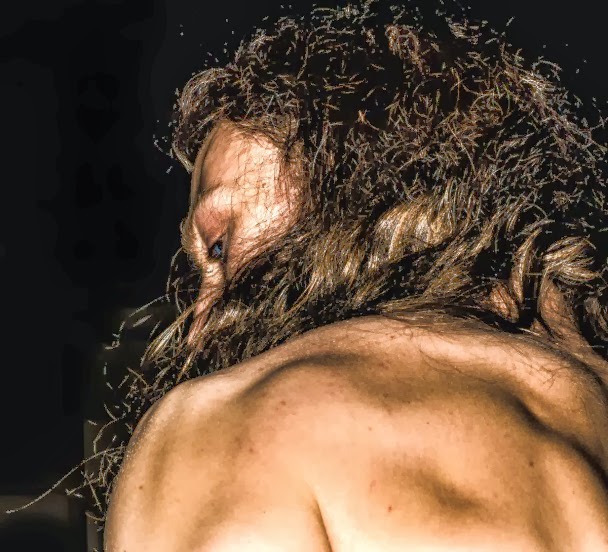 1. What the Fuck
Rapping right away, right away on this sort of relentless flow. "Skeletor hoe" lol. "Stick your whole hand in the grape bowl, sucka", great aesthetic of 8th grade halloween parties. So many great lines here. I love the piano beat on this beat. The layering on this title-drop breakdown thing. "Take me back to that McDonalds" i can relate so much. I dunno who Black Noise is but this is fantastic fantastic. His flow is ridiculous, this is almost like an M.O.P. song lol. S

2. Animal
Steel Tipped Dove, aw yeah. Beat is typical of him which means it's very atypical and only sorta seems like even a beat. On a real party grind sort of flow, I love when his voice gets all wild. Quoted a few lines from I think a Heems feature he did. "That's right, I'm an animal", good hook. I like how the beat becomes more elaborate in stages, that's the sort of thing that can get me addicted. He does a lot of joke stuff with pausing and like, deadpan anticlimax, that's always fun. Oooh, we get a bit of a singing melodic flow here, even with falsetto. The contrast of that and the subject matter is really funny. This is really slick, really addictive. S-

3. "Jesus Piece"
Woah I love this dense low sound, sounds somewhat... I dunno. "I'ma spin the whole world on the tip of my dick" damn, lol. Woah the layering of the verse and the hook, wow the beat with that grimey grinding sound, this is so good. And man TRIPLET FLOWS, yes. I'm so addicted to this these days. So much skeleton imagery. I love the structure of this song, so many repetitive elements and yet a sense of escalation. "Ball so hard make a rock seem soft" simple, good. "Y'all ain't fucking with me, skeleton" lol. I'm not sure who Roy Rogers is though tbh. I love this man it's so grindy, I love that sort of feeling in a song. AAAAA i love this synth sound right at the end here, Steel Tipped Dove is a genius. S+

4. "Too Ill For the Law"
This was a single, I listened to it a few times, it was really good. This beat is like... holy shit. I feel like most producers would stop three or four times with subsets of this beat and say "that's good enough" but Hghwnd keeps going, amazing. This sort of flow is like... who can even do this sort of thing? "Too ill for the law" is such a good hook, it has a really good cadence. Hahaha this verse that's all just Cs and Ps... man I want Common Projects white leather sneakers. Um anyways. The way the beat "fills out" on the hook is huge, "kick in the door waving the 44". Damn. S+

5. "Mumra"
Just a minute long wtf all these songs feel too short, so addictive. This is so dense... "First woman only birth demons" lol, no idea what this means. Mumra/Skeleton... I feel like a whole mythology that only makes sense to him is being developed, lol, so engrossing. Now there's a skit, it was strange. A+

6. "Chinese Slippers"
This is a strange beat, woah dang his flow is so intense. Bill Ding is fantastic. I really can't tell what he's saying tbh but it all sounds pretty interesting. They do that thing where they chop up and shift his voice up and down a scale, it's a really cool effect, so addicting. I love the effect on the voices in the "background", "Where is your God now?" sample, lol. A+

7. "Black Swann"
Woah this is noisy as hell, I love it. Ft. DVS and the title seem to imply it's like, a sequel to Swann Gang maybe? So far doesn't seem like it though. "Foooooooooood fiiiiiiiiiiiight!" lol. Woah this flow is so intense. So many insane images, shouts out back to "Jesus Piece", quick "Fuck your couch" drop, lol. DVS now, he's really good, I wish I heard more stuff from him. His breathless stream-flow is amazing, so smooth and yet percussive. "Wage war when I walk to the table", "Your god not available", nice. This beat is so... chaotic. It's like, a slurry or something, lol. S-

8. "Body Scream"
Another bizarre skit first. Beatboxing. Woah. Hot Sugar is like a genius beyond all the other geniuses around here. This beat is already like... transcendent. I can't even speak about this flow, it's like, flawless. He's just going way way way in. Haha oh man this hook, this is so surreal. This is like... some bizarre universe of reverse-Burial, or something... And yet it feels genuine, too. Cool. Man this is like sincerely a love song sort of thing maybe but I find it tolerable because it's so excessive and the aesthetic is so naturally whole. Lol. Ridiculous. His sorta raspy falsetto here is like... endearing. Haha oh man and then the octave down repeat with Hot Sugar-style pseudo-claps... hahaha what, amazing. S

9. "Skeleton"
"Let's leak it"? "Billy Crystals motherfucker", lol. What is going on? "Skinny skeleton", I love the way he says all these words, especially "skeleton" which sounds more like "skellah-tohn". This is a weird-ass song, just all loops and samples. The sample of this girl saying "ummhmm" or whatever seems to occupy a weird/impossible-seeming auditory area. Are these video game samples? They sound vaguely familiar. Like this screaming sounds like... Actually I have no idea. Bizarre. A

12. "Dope As Fuck"
Oooh, a very creepy sinister sorta beat. Man this girl's voice is like... disturbing, somehow. "Death is easy, life is hard", these are really brutal lines. The one sound on this beat is genuinely terrifying. This is so cool, how does one even make a song like this? He's on a Geto Boys sorta flow now lol. I love it. You can tell Lakutis genuinely likes a whole lot of hip hop, that's a great thing. S-

That was a lot of fun
Too short though, like, way too short. It's actually shorter than the supposed EP! Really great variety, but the production was so good that I felt like some of the songs were just a tease rather than a whole song. He works so well with guest features, it would have been great to see some other Greedhead-types up on the tracks, or basically anyone... just to get more of those deep, creepy, solid beats.

Aside from that, it was fantastic. I kinda felt going in the sort of apprehension that I do when I see a sequel to a comedy movie I like... like, I was worried that he'd return to a lot of the jokes and "memes" of the first album, and thus ruin them by defeating the spontaneous feeling, but at the same time, I wanted the spirit of what made the first album so engrossing to return. Well, in that regard he knocks it out of the part, incorporating some stuff into his unique rap lexicon without dragging every classic back out for a checkbox-filling second round. Like, he keeps up with the ideas of horrific self-avatars without repeating specifically "death shark", etc.

Great stuff. I hope he gets more active, 'cause 25 minutes/3 years is simply way too little Lakutis in my life.
Posted by Keatsta at 1:58 PM