I was running through the 6...

Gucci dropped this little EP/mixtape thing whatever, not slowed down by prison and totally undeterred by Drake trying to take the term "6" and relocate it to Toronto, which I think is about as geographically and culturally far as you can get from Atlanta while still producing a world-famous rapper. A few days ago I gave this an "OK", mainly on the basis of how much I loved shouting the hook, but let's be real here - there's still only one real 6, and that's zone 6. And there's only one Trap God that's Trap Godly enough to be Mr. Zone 6, and that's Gucci Mane.

We got an all star assortment of guest verses and production, a direct challenge in the title, and I haven't reviewed an album in a while, so here we go! 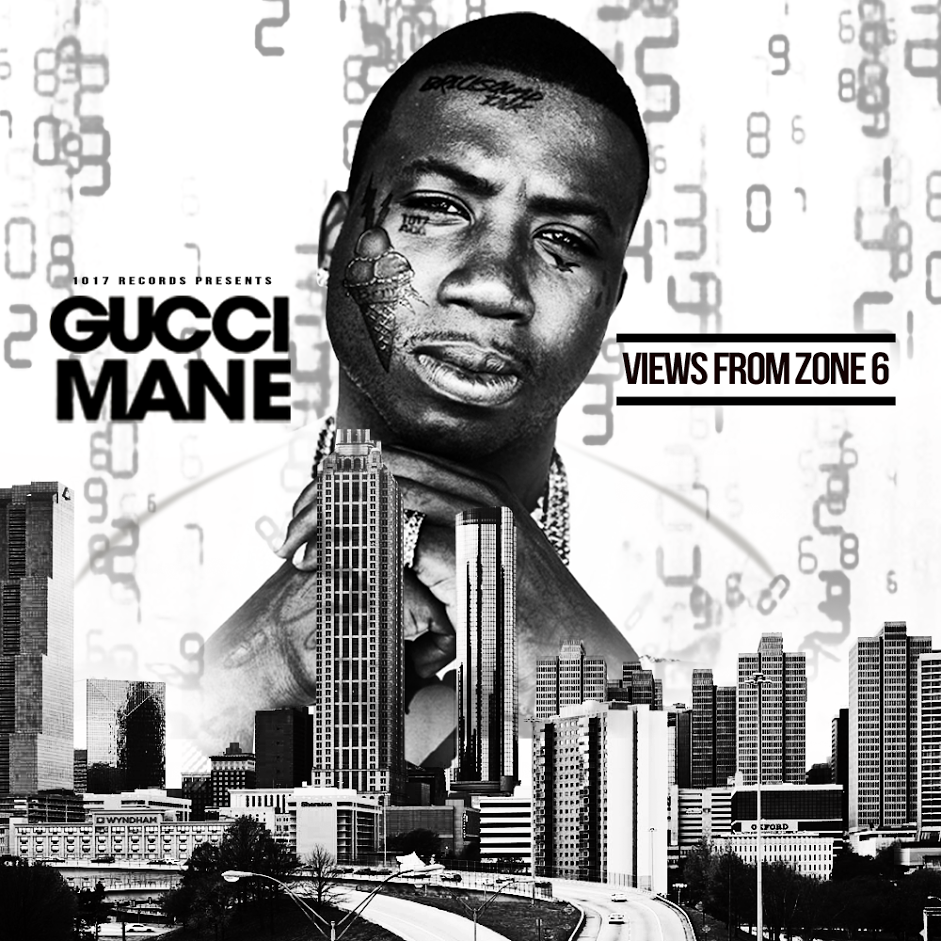 1. Angry
Boom okay here we go. Feat. Fredo and Lil Reese, two Chiraq drill masters, and this beat is really drill-y. Gucci going in on a really active flow. "Give a shoutout to my new bitch, she a fuckin hustler", and then we get a nice few lines about how great she is. "I bought her three cars so she got options" haha sweet. Ooh the way the beat goes at 1:10 is really intense. I love those drill drums, and the "squad" ad-libs. "New bitch" themes on the second verse too, idk what this has to do with "angry". I guess all these flows sound angry like wow he's going in, AKs in the closet, classic Chiraq image. Gucci calling himself a "neighbourhood nigga" on the hook is awesome because I feel like I both do and don't understand what it means at all. Reese calls himself that too, and someone else a "block bitch", which means she's been "around the block", uh, hm. Nice intense drilly music. A+

2. Bitter
Ft Young Thug awwwwwww yeah. Not sure who Yung Glessh is but it sounds like something Thugger would say. This first verse is so hard to make out but I love this sorta flow from Gucci so it doesn't even matter. Lots of better/bitter lines. "Ima nut in her face, big dipper", what could this possibly mean? Thug going basically in, like, deep into the swamp, just a sorta wandering, wambly sorta verse. Sorta verse that makes you make up words like "wambly". I like Glessh's ad-libs on the hook. Haha I like this guy in general. I really like the chiptuny part of the beat, this feels kinda drill-ish too. This whole track is mastered so quiet though, what's up with that? I feel like this could be so much more of a banger if the vocals and the kick were way louder. Uh oh well. I like how Glessh seemed like he could break off any line into just yelling or whatever, that was pretty sweet. This outro seems totally excessive but I don't hate this beat by any means so I guess it's OK. Pretty solid track but I wanted more Young Thug. I always want more Thugger tho. A

3. Count A Check
PeeWee Longway on this track, who I think is maybe the most deranged-sounding of all the new Atlanta stars, and that's saying a whole lot. Usually he goes waaaaaay in, especially on this sort of menacing beat... he perceives the sort of inner energy a beat like this has. Ooh yeah this sort of flow is good on him though. "See a nigga count a check and wanna have sex", that adds up I guess. Gucci's neck is half a mill, damn, million dollar watch?? I love the Juicy J sample on the beat, I love any beat that has that. "I kiss her breasts, she have a million dollar chest" lmao. Damn man this beat is awesome. Every time I think I understand how great it is I notice something else. They did both the Morricore-type beat and the Juicy J-type beat. PeeWee seems sorta more restrained than usual, but this story he's telling is absolutely crazy when you get it. Both him and Gucci had a great escalation in their verses. I heard some Burr adlibs, sick! This is a "Certified Banger". S+

4. Eskimo
TWOOOOO CHAINS. A lot of people said the latest Noisey Atlanta, about 2 Chainz, was boring, but I thought it was really interesting. So cold (via the ice) that he's an Eskimo. Hey, that makes sense. "More tattoos than a white dude", dunno what this means. "Working these streets like a prostitute", I know what that means and it seems kinda silly. I love the Gucci adlib that's like "well damn!". "Call the therapist, I got a swag flu" woaaah damn. "Eskimo" makes me think of this trance song in ITG I play a lot called "Eskimo" and that's really silly. 2 Chainz on his "idgaf" flow, just saying things for the sake of saying them, whatever. It's all about the personality. "I bet the neighbour know my name" (re: girls being loud during sex) but lol I just think of him being a good neighbour... going and introducing himself and such... lol. Okay this is pretty whatever I think they shoulda dropped some sick trance samples "staaaaaaaay with you toniiiiight~~~~~" A-

5. In
idk who Yung Fresh is but I hope he's yung and fresh. Ooh, this beat is pretty sick, nice full sound, really like the tone they've gotten. Man already I love their chemistry, the "how much?" adlib is too good. Trading lines like this is sick, Gucci does it so well, really highlights the contrasting flows and tones. "F is for Fendi" lol. "Ice cream on my right cheek", still the GOAT tattoo. "91, where was you?" lol is this Zomby??? "Wear 10 chains, so she gotta stare". This hook is so exciting, loving the sheer number of voices. Fresh with a nice laidback flow but with sorta spastic doubling, I love it. "I know how to equal the equation", um, I guess so. This verse is really solid though. I like the way he goes on tangents off beat and stuff, sorta like Big Sean. Idk if I wanna review the new Big Sean album, I might do that later tonight, really in a music-reviewing sorta mood today. Solid track, I really liked the atmosphere of it. A+

6. Make Yo Move
okay here we go with the genius of triplet flow, Quavo. He's in some Young Thug-y autotune drenched flow too. I hope he goes in too, though. This is a really luxurious sorta beat. Aha here we go, the classic Quavo flow... slower than normal and really autotuney. "I wanna eat you up like a Scooby snack", I learned what that meant but I forgot. "Diamonds hit like Jackie Chan" haha sweet. "She talk too much, annoying", lol, this feels so minor. Gucci on a bit more of an active flow, I really like the pitch shifted "Gucci". He has the same autotune effect but it isn't so apparent in his range. wow that verse felt way too short, Gucci pls ;__;. A-

7. Right Now
Awww sick Honorable CNote, great producer. And Chief Keef???? And ANDY MILONAKIS? what the heck? This is a pretty sweet beat, very sinister, Goldeneye 007 sorta deal. Ugh god I just got the worst acid reflux just now, completely distracted me. Gucci's sinister quiet flow is pretty intense and effective but also sorta adorable in a way I can't explain. "Every time you say my name out loud, a flock of bad bitches gonna come around", wow yeah? I better be careful. Purse loaded up with a gun, scale, pills... solid going out kit. Keef on his most idgafy idgaf flow and I love it, with all his classic adlibs. Pretty solid verse really, he didn't phone it in by any stretch. Him and Gucci work so well together. Haha omg here he is, Andyyyyy, sounds like a Big Sean verse sorta. "Bars!" "How you know I'm real just listen to how I say it", "Spend a few dimes on some new Versace", man he's having so much fun on this. There's only one rapper who can outdo him on this metric! Well, that isn't true, uh, but there's one rapper who clearly wins on this metric hands down! And he's on the next song!! S

8. Rolling Stone
Awww yeah Mike Will beat, "I fucked her yesterday but I forgot her name", this is a pretty brutal verse, Gucci sorta bullying this guy lol. Haha wow the way he adapts the classicest of the classic rock songs on the hook is hilarious. FFFIIIIIIIIGAROOOOOOOO, our boy Lil B! "I'm a Rolling Stone, selling pussy and phones", "So many bitches on my dick I thank the based god!", really classic Lil B verse, classic "way too short!" Lil B guest verse. Like come on I need mooore Lil B ;____;. This collab is one of my all-time favorites. S-

Okay that was pretty fun
I dunno, it seemed like... not a lot of people really "went in"? Like, everyone was on their "slow and low" type of flows, when I wanted like, the superactive banger kinda flow. It almost seemed like they were trying to ape a Drake album's structure, lol. But I don't think Gucci would let himself be influenced so much by an external factor like that, as hilarious as it would be. But yeah, the beats were really nice on this, some good features, Gucci doing his thing, which has a pretty high minimum quality. Good project.
Posted by Keatsta at 7:52 PM