"Instead, I became a painter and wound up as Picasso"

The Life of Pablo.

Broadcasting to theaters worldwide (but not in Canada ;___;). Instead, I've made myself nice and cozy at my computer. Thick snow is falling gently in a continuous stream that looks more like a screensaver than real weather. It is beautiful because I don't have to go outside.

It feels like nothing more can really be said in preparation for this album. His struggles and successes in the process of his creation have been spun across the internet in thousands of (often conflicting) rumors and extrapolations. His twitter has been a font of incredible boasts, baffling controversy, and tacit promises. Should we believe him when he says this will be one of the greatest albums of all time? Should we believe that it's even complete?

As I decided to cut myself off from any leaked snippets or content information that isn't released by Kanye himself after "No More Parties in LA", I'm much less informed than many of the other rabid fans out there. At this moment, I truly have no idea what to expect. If I had expectations, based on singles or titles or features or reports, they all seem pointless, irrelevant. A second of silence is enough for him to trash everything and start over. I'm half expecting him to cancel it.

I'm writing this at 3PM. An hour to go. I'm not really sure what to expect. A fashion show and an album, I suppose? The album playing over the presentation of the clothes, like past shows? But will he clearly denote the tracks and such? Will the show last as long as the album? Will it be available for download immediately after? Will the show have a direct audio feed of the music or will I hear what the video cameras are recording from the speakers?

And I'm gonna sit here and type while I watch the stream, cause that's what I do. 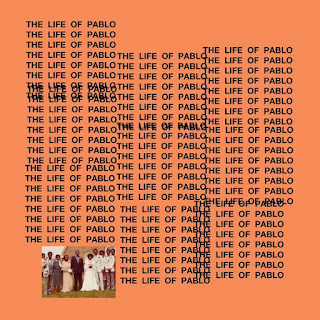 Okay. The stream is starting. Footage of Madison Square Garden, I think. Looks pretty exciting, wish I was there. The seats slowly filling up. I can hear mumbled talking. Now a shot of the lobby. So excited. I really like the album cover. It's like basically nothing I'd ever seen before. Lots of people are mad but whatever. I think he couldn't exceed everyone's expectations with any sort of traditional cover. Lots of shots of people's feet. Where are these cameras positioned?

The stadium is slowly filling up. The crowd is getting louder and louder. I am extremely paranoid about my rural internet screwing up.

Shots of the stage now. It could begin at any time.

THERE HE IS, THERE'S KANYE
HERE WE GO HERE WE GO
an assortment of rappers surround him
a pantheon

he's plugging in his laptop
it's so real

his shirt says
"Feel Like Pablo"
AH
SOUND
i heard sound
what if he's gonna PERFORM the album??

1. Ultra Light Beam
IT'S HAPPENING
THIS IS IT, what is this sample?? IS THAT NORI'S VOICE? AMEN. AMEN.
WE ON THAT ULTRA LIGHT BEAM
what a sweet sound
THE DRUMS
deliver us peace
so gospelly
oh man that sort of stuttered sound... so good.
this is a god dream
ohhh man the chorus echoing
it's so sweet and minimal
with individual pieces of richness
oooh who is singing now
oh man this spoken word
oh maaaaaan
chance
;____;
so tender and small
the way his flow picks up
my ex looking back like a pillar of salt that BIBLE shit
WE ON THAT ULTRA LIGHT BEAM
this is EVERYTHING
spoken word outro
the unveiling
oh man
gettin louder
woah
WOAH
those are some cool clothes

2. Father Stretch My Hands??
FUTURE
METRO BOOMIN
BEAUTIFUL MORNING
holy shit this beat
future ahhhhhhh
LMAO THIS BLEACH STUFF what the hell
is this really the same track as those lyrics he posted earlier??
OH the beat switch PERFECT those Street Fighter samples hell yeah
yeah here's the lyrics he posted
so intense, so relentless
getting WILD, i didn't expect this at all
hugging each other :D
oh man the way he uses the autotune to make that sort of stutter sound
"i just wannabeliberatedddaaahhhh", so good
i hope the CDQ's bass is SUPER HEAVY here
oh the SLOWDOWN yeah hit me with the SLOWDOWN
WHAT THE
daft punk robovoice
robogospel
omg what is happening

3. Freestyle 4
I think this'll be next? these models are very professional. kanye just rappin and having fun. beat super yeezusy and industrial, really disorienting. "Hands up, we just doing what the cops taught us", "I'm just saying what I feel at the wrong time", "Name one genius that ain't crazy". This beat is so bizarre, so bizarre, I really want the heaviness of the CDQ. "Steve Jobs mixed with Steve Austin". "THE GHETTO OPERA", is he actually about to give out furs to the whole audience??? lmao jesus wow.

4. Famous
Rihanna?? Someone who sounds like Rihanna? Nice full operatic sound and then ooooooh that beat. "I FEEL LIKE ME AND TAYLOR MIGHT STILL HAVE SEX, I MADE THAT BITCH FAMOUS" what the helllllll and he MADE HIS OWN "Kanye's best" joke what the HECK what the hell is he doing. haahhaahahAhAh omg. "WAKE UP MR. WEST", omg omg, what the hell is he talking about, this is nuts. Oh man, the samples and stuff, this is so rich, so tropical. Peurto Rican Day, can't stop us now. Who is doing this sort of dancehall voice rn? The girl in the bodysuit and fur is getting restless. The awkward humanity of the models is engrossing. Wowowow.

5. Highlights
It just made like a computer sound?? Oooh what is this intro. OH. this beat. hell yeah. that super staccato but super round sound, how do they get both? We only making the highlights, hell yeah. "Sometimes I'm wishing my dick had go-pro" lmao kanye please. Slow motion, slow motion. "I BET ME AND RAY JAY'D BE FRIENDS" omg "Only problem is that I'm rich", omg omg. Threatening his son's future coaches hahaha omg. Jesus wow going way the fuck in, what is happening. Equinox? Is this some sorta like... pagan thing? Some models sitting now, smoking. An interesting sort of freedom.

6. Feedback
ayyyyy, rap god shit, what is happening. Super spooky intro. The mixture between this "classic spookiness" and new abrasive elements is crazy. "What if we fucked right now?" explored in depth, no one has answers to these questions. Hooooly this beat, this is nice. This beat oh my lord, what is even happening. And now into some deep noise pattern, i need the CDQ badly pls pls CDQ. oh man this meta rant, all acapella, going nuts. the classic joke, i love you like kanye loves kanye. has he lost his mind?

7. Fade
We heard a bit of this before. This truncated but yearning flow... die for those I love. Oh man this falsetto. Kanye takes Lexapro? Holy shit this song. Hooooooly wow what the how. oh man this beat?? what the hell is happening?? is this what it sounded like before? I thought it sounded completely different. And what the these drums?? this crazy shift?? these vocal effects?? this desperate sustained sound? man wow okay. no idea what's happening anymore.

8. Real Friends
HELL YEAH Real Friends what an amazing song holy shit. I wonder if it's changed since the single.

WAIT i'm confused. This should be track 9. I think we skipped fade?? I think what I thought was Fade was FML cause of the "I should go ahead and fuck my life up" hook??

Real Friends is still amazing, surprising no one.

But soon: Wolves, the greatest song of all time, are you ready? I'm not ready... The howling... leading into it... here we go.

9. Wolves
AHHHHHHH
AHHHHHHH
I love this song so much
for a year I've loved this song.
It sounds mostly the same so far... maybe a little faster?
OOH there's another melodic string-sounding line
OH echoes, interjections
you TOO WILD
you TOO WILD
you TOO WILD
and I NEED YOU NOW
OH a new verse
what the hell
holy shit
oh man
the pitch shift?
someone just took a sandwich?
what if mary was in the club holy shit
covering his kids to save them from the wolves
and now what the hell
i knew this song was gonna be nuts
we just WARMING UP
vic mensa? new verse??
no nooo
where's the sia part
i loved that part
is that it? is that it?

that was pretty crazy

NEW THUGGER
WHAT THE FUCK
THIS IS SO GOOD

is this from Slime Season 3? From HiTunes?

and now Vic playing a song?
what the hell is going on?
this is crazy
it just turned into a "Kanye's Friends DJ Set"
and i am 100% okay with all of this

HOV!
shoutouts to tidal, thanks tidal

okay what is this now? what is happening?? what sort of crazy banks of unreleased music does kanye have on that laptop?

Freestyle 4 again, okay lol. this is nuts. LOL just skipping around the album randomly. "Hey guys you remember this one? wasn't this part good?"

man every song on here was completely insane

oh thugger was on highlights? i thought that was future lmao
a lot of other guest spots i felt sorta sure of but i wasn't really

I guess it was Frank Ocean at the end of Wolves?
I have no idea what will happen now
I'm gonna watch until the stream goes down

NOW HARD IN THE PAINT
WHAT A CLASSIC
hahahaha
how long will this go on, how long will i watch it?
and now FORMATION
BEYYYYYY
now rihanna's work
another good song
all the models dancing and having a good time
i feel committed to stay until the stream goes down
even if i get hungry and stuff

ahhh, hahaha. what a crazy time.
LOL they cut off Work right before Drake's verse
like truncated it on the first syllable
now heartless

okay, that's it, stream's over.

Uhhh... I think I'll just post this, and then when a CDQ of the whole album is out, we'll listen to it again for a normal live review. Between now and then I'll just have it sorta linger in my head.

I don't really have any coherent thoughts or feelings or anything yet.

It was a fun time. The album seems insane and amazing.
Posted by Keatsta at 3:02 PM