Happy Birthday to Me

The new first album I'm going to listen to at the age 25 is Young Thug's Slime Season 3. This is what we call "the right foot".

Compared to Slime Season 1 and 2, this is a much shorter project, less than half an hour long. I have mixed feelings about this. These shorter albums are nice in that they can come out more frequently, and every track can be given a lot of attention in that span. But at the same time, I kinda liked the idea of the Slime Season tetralogy becoming a 100+ track four hour behemoth, like Thugger's equivalent to the legendary Lil B tapes or KOOL A.D.'s O.K. Idk maybe I'll just include this and I'm Up as all of one project in my internal canon. Do you not have an internal Young Thug canon? You should have an internal Young Thug canon.

Anyways, let's see what we've got going on here... 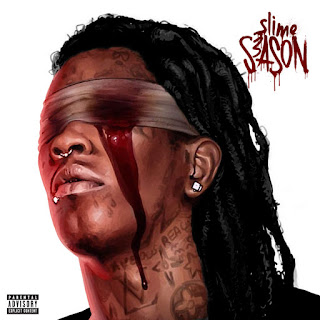 1. With Them
Yooooo is THIS THE SONG HE PLAYED AT KANYE'S THING!??! oh HELL YEAH IT IS is this song BETTER THAN ANYTHING ON TLOP??? ummm no but it is hella good and i am so excited to finally hear it. "Diamonds all black like I'm racist now", no idea how this makes sense to him. Holy shit his flow on this one is absolutely bananas, he is having way too much fun right now. "I think I need help with my kidney" :( "She suck my dick on the plane and I just call her airhead" hahaha omg. "Stack it up like a Lego, yeah" hahahaha oh man, and this beat is just perfect too. I thought maybe this'd be on HiTunes but whatever. This is just... perfect. I'm so happy right now. **

2. Memo
oh HELL yeah LONDON ON DA TRACK. this crazy spppooooky beat, YEAH YEAH YEAH, reminds me of AYAYA for some reason. What the hell this YET ANOTHER BRAND NEW FLOW? how does he invent all of this? and ANOTHER new one starts at 0:50, every ten seconds a brand new flow. I'm just so impressed with the beat too, the anticipation on it. Know they get the memo! Memo is a very good word for Young Thug to rap. "When I die I want a hundred bands inside my casket", that is a beautiful (????) idea. "I'm getting money nigga, can't you tell (hell yeah!)", perfect. The "yup!" sample is really good, like the one in 15 Step hahahaha, does that make sense? Am I allowed to say that? LOL. YAP! So good. **

3. Drippin'
Oooh this is a straaaaaange beat. Sounds like some Yume Nikki shit so far. I love it??? "What do you want from me?" literally whatever you wanna do. hooooooly shit this flow, holy cow?? "Living bulletproof, if I was you I'd be mad too", hahaha oh man. And the demonic double vocals at ~a minute in, and some PATOIS? a TING about me? dang, is there nothing he can't do? "Six skulls in my mouth like an old English clan"? what? i don't get it. Oh man this is some really wild stuff, his voice just clipped omg that's an auditory fetish of mine, so intense. Surpassing the English language. Very far beyond English. I don't understand a lot of what he's saying and/or what it means. But that is OK for now. The way the beat evolved was really cool too. **

4. Slime Shit
Yak Gotti's been on some of his shit before, it's a good combo. Oh shit man. Killin 12 shit! This flow! Good god! How does he think of this! "I'm stupid rich, I go ape shit, call it Ludacris!". Yak Gotti sounding super sinister. Calling em out on "dropping dimes", I didn't know people still said that. "You prayin that you live, I'm praying that I hit", this is actually pretty complex ontologically. Idk what "lighting up your tacos" means or if he isn't saying that at all. Oh man the way they double up with like "hey-hey!" on the response sometimes is super hype and I can't even describe way. Oh man the double at like 3:00 is so good, that sudden intensity, talking about his percs, man oh man... I love the little loop in the back that sounds like its coming in over the radio or something hahaha idk how to describe it. "And they all fake, like some bitch titties" lol pls. **

5. Digits
Okay so... this is apparently the "wrong digits" or something? And the right one is supposed to have Meek Mill? But WHATEVER this one seems SICK TOO. "These horses don't stop, they keep going", holy moly and he does not stop. I am flabbergasted by this flow. This is insanely impressive, Liu Kang kicking. "Why not rich life when it's gonna keep going? When you die someone else is born but at least we got to say WERANUPSOMEDIGITSWERANUPTHEMONEYWERANUPSOMEDIGITSWERANUPTHEMONEY ahahahHAHAH this is amazing. And the beat is godlike because it's london on da track so of course it's great. How is this SO GOOD???? i honestly don't get it. **

6. Worth It
woah strange beat. LONDON AGAIN hell yes. I have no idea what any of the words he's said so far are. OH WAIT i heard this one before, this had the music video where she throws his phone in the hot tub and they paint together and stuff, and it has the subtitles, it was really interesting. "I only eat green like koala leaf" haha. The way he says "buh-byeeee" is good. "This ain't no drugs, I know she worth it" haha, like, "i know it isn't just cause I'm on drugs"? hahaha. "I don't know why, but I cut down on that syrup", prolly for the best. "She got on top and she ride it Kentucky derrrrrby", ahhh so good. "If this is how I'm feeling it's gonna work", actually a very beautiful sentiment. *

7. Tattoos
Hmmmm, I really like this beat. PIANO? LONDON ON DA TRACK? yes, this is homerun. Another pretty nice message, he's not worried about his girl, she's tough, she has tattoos and piercings. but good god that beat, that piano, what in the hell? how does he do it? is he the greatest young thug producer? "I bought so many mollies I'm on Michigan"?? oh my god this flow is completely insane, I can't believe I just heard what I heard. "I get my weed from Snoop Dogg it's OG" hahaha really? I wonder if that's true. Honestly I am most impressed still by the piano. I cannot think of another hip hop beat that went for that sort of sound, with the trills and stuff. Like I know TRILL but this is like TRILL. uh. you know what I mean. **

8. Problem
Oh this is a pretty banging beat. This intro feels sorta Lil B-esque lol. The explanatory tone. "Money long as a greyhound" hahaha what an image. WOahahahaha the synth line at 0:46 is amazing, all this stuttering and those piano chords. "They blue cheese, they're not ranch", this is a comparison he's made before. And again this flow feels like nothing else. "And I'ma go ahead and free Offset, he a Migo" dang yeah FREE OFFSET. "What is your problem" as this sort of disjoint statement at the start of the hook is super effective. sheeeeesh! "All my attires are neat! All of our friends are unique!" hahaha "I'm a demon only see when dark", "Dinosaur Bs and some Cs with us", "Damn it's Friday I need angel dust", "I shoot them with a bow and arrow", oh my god oh my god what??? we have gone beyond the lifestyles of the imaginable. Man that stutter though, that's so good. **

Yet another mixtape of ALL GOOD SONGS

I don't know how he does it. Granted, the level of talent devoting all their love to his projects makes it pretty hard to imagine anything he puts out to be below some minimum level of quantity, but the work Thug himself puts into every track, every verse, every line... it just seems impossible. The creativity and humour of the jokes, the sudden poignancy of the admissions... the athleticism and fluidity of the greater flows he puts them into... the strange logic in the song's overall structures, and their interplay with the beat... You read articles about his lifestyle and health and he becomes more and more of this mythic figure, this alien. You just have to conclude that this comes naturally to him. It may seem like fantasy, but it's the only way it makes sense.

I wonder what will be next for Young Thug. It feels like more and more his projects are aimed mostly at the existing fans, not really emphasizing the hook-driven stuff that could be a crossover radio hit. I feel like that sort of stuff might be getting saved for HiTunes. Then again, stuff like "Best Friend" can explode in popularity for basically no anticipated "rhyme" or reason. haha. That was a joke. At any rate, the further evolution of his career will doubtless be as baffling and wonderful as everything thus far. That's good.
Posted by Keatsta at 8:33 PM