36. He Has Left Us Alone but Shafts of Light Sometimes Grace the Corner of our Rooms by A 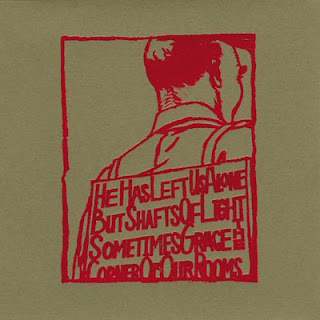 There will probably never be another band like Godspeed You! Black Emperor. It seems so unlikely now that any other group could rise in their wake with the same spirit, the same quality and more importantly, the same massiveness. GY!BE was simply huge, a venerable colossus of music. They could play music about the apocalypse and it felt like the meteors were about to hit. They could play about death and you’d feel about one breath from a heart attack. They were earth-shattering and monstrous, and to understand them was to be dwarfed by them. For any band now to try to rise to such a status in the genre would almost feel derivative.

A Silver Mt Zion is not the band to try to rise to that status. Created by GY!BE member and unofficial frontman Efrim Manuck along with some of his bandmembers, ASMZ was a side project born out of a desire to bring the aesthetics of GY!BE down to a more personal and relatable level. The music they produced does match GY!BE’s spirit and quality for the most part, but they bring their gigantic mass down to a personal level. They’d sing about the apocalypse and it would seem like you were there in the last few moments with your loved ones – what was going out side was nearly irrelevant. They’d sing about death and you’d be healthy, but in your arms, your dog is dying.

There is an emotion you feel in that sort of situation that is hard to find in any other circumstance. It’s part grief, for sure, but also a strange mix of nostalgia, regret, and some other German emotions I’m sure. It hits you right in the gut, and stays there for an uncomfortably long time, slowly melting away but never disappearing completely. Manuck’s one goal in this album was undoubtedly to convey this emotion and thereby pay tribute to his recently deceased dog by spreading his grief in such a beautiful way. Indeed, Wanda the dog was the sole catalyst for the creation of A Silver Mt Zion, and in her passing, she inspired Efrim to say what he felt Godspeed was too powerful to convey.

For all these changes, the first half of the album really doesn’t seem all that dissimilar to GY!BE. Although the once 10-member strong band has been cored down to a few components, there doesn’t seem to be any gaps in the wall of sound when they try their hand at straight-up post rock bombardments. And it’s excellent, but from these first tracks, you could easily get the impression that ASMZ is simply following in the footsteps of its predecessor. It wouldn’t really be a disappointment by any means, but forming a whole other band just to put a bit more emphasis on the string section and work out the majority of the drum parts seems excessive. But then the forth track begins and all becomes clear.

If I could break down this album into each element and compare them, the vocals would be far from the largest section. Only three tracks have vocals at all – the first is a sample from some sort of sermon or speech, the last is a mere two or three sung lines, leaving only the forth track, “Movie (Never Made)” as the only real “sung” track. Efrim was initially apprehensive about singing but his lyrics are well crafted and poignant in spite of (or due to) this. More powerful than the lyrics – which are powerful enough, disturbing and bleak in a wonderfully abstract and yet distressingly relatable way – or the clashing between the rickety bass and the pounding piano, is the first sniffle and echoing knock that begins the song, dividing the grandeur of the first three tracks with the mystery and heartache of the latter five. From this point on, they are in a whole different world than GY!BE, or, more accurately, they are in the same world, but have descended angelically from a perch of omnipresence onto a more relevant and personal plane. And from here, there is no going back.

Still remaining in that elemental state, two specific sound molecules stand out more than the rest as focal points of the album.  First is the aforementioned beginning to “Movie (Never Made)”, not only significant in its role in shifting the entire tone of the album, but in its almost iconic departure from all sounds prior or thereafter. The second one is also vocal based, and it likewise marks a bit of a departure, or at least the beginning of a short side-trip into another style. It comes at the beginning of the seventh track, “Blown-Out Joy From Heaven’s Mercied Hole” and consists of the following lines, delivered simultaneously by Efrim and Sophie in a dismayed whisper: “Don’t tell me that I am free/Don’t tell me that I am free/’Cause I have not been well, lately”.

It is that last line that I think embodies everything Efrim was trying to convey with this album. It sounds like the last words of someone before they completely breakdown into tears – breathless, desperate, with a whole flood of emotion being choked back. But the band lets something else out afterwards breaking down in a way that no one could expect, replicate or fully understand. The track ditches melancholy for stanch introspection, that itself giving away to paranoia, delusions and madness. It is akin to being lead into an ever darkening forest, complete with eerie shouts from unimaginable creatures and a meandering bass that makes me think with uncanny ease of old wagon wheels. And every time you think the eccentric piano riffs are dying down, or maybe the whole thing has begun to grind to a halt, the night just keeps rolling on.

From there, there is an emergence from a deep haze into a clearer sort of mystery, the closing track emerging as a definite resolution, but with a sparseness and open-ended feel that is atypically erratic for an album of smoothness and gradualism. Grating squeals interrupt wandering string and piano parts that sound unmistakably tired. Combined with the title, “For Wanda”, obviously referring to the aforementioned inspirational dog, the song becomes even more confusing. There are many more mysteries on this album than I have time to mention, let alone try to unravel. But these, like much of the albums work, are intensely personal, and their meaning to Efrim is enough to justify their existence.

The conclusion to the album is a good contrast to the more powerful first half, but it is in some of the middle tracks that the whole work finds its heart. In “Movie (Never Made)” and “13 Angels Standing ‘Round The Side Of Your Bed”, I feel the two halves of the spirit of ASMZ are best represented. The first shows a side of naïve intent for debauchery and revolution that sounds powerful and decisive on paper, but the implication is that it fails in the face of reality. Efrim’s unsure, unsteady delivery conjures up images of teens sitting on a hill facing a city and imagining it in flames, an important distinction from GY!BE, a band more than content to conjure up the flames themselves and leave the viewing to you. The second imparts a similar feel of lust for destruction but not the stomach, except it is more a lust for purity and beauty. ASMZ is again bringing down the majesty of GY!BE to a level in which it impacts each and every listener. They both make you think the world is ending, but one brings the destruction of the planet, where the other wants to make sure you realize that it means the destruction of you specifically too. Did they succeed? Just look at the number of comments on the last.fm page for the song, all young and impressionable teens saying that they felt the song should be playing as they die. Overly melodramatic? Faux-emotional? Sure, but that’s that special kind of sorrow for you. That’s A Silver Mt Zion for you.