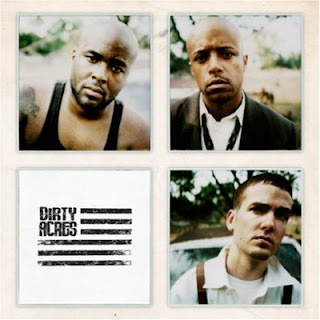 It's a question I've wanted to ask ever since they stopped telling jokes and started spilling their guts way back on the odd track of their first release: how serious can some guys who call themselves Cunninlynguists take themselves? This, their fourth LP, seems to have finally answered my question. They can take one of the most enlightened stances on race politics in music, accepted poverty and ghetto life in years, say it with a straight face while throwing in the occasional pun, and take making music more seriously than any other rapper in the game today. However, they still are too good to take themselves seriously.

Making music requires a certain amount of ego. Somewhere along the line of production, you have to shed a good portion of your modesty and think, "What I am doing here is worth making, worth hearing, and I am a talented individual for being able to create this". Otherwise, it will never really come to fruition. It seems, and this is far from a surprise, that egos usually swell in proportion to success, to the point when your average chart-topper feels that he is somewhere between Jesus and Buddha in terms of cultural significance and wisdom. One genre where this correlation does not hold true, and indeed, it seems that one's ego can balloon from almost nothing at all, is rap music. Long a staple of hip hop albums from pure excellence to pure trash is the dis track or boast track, where the artists take a few minutes just to explain why they're so much better than the rest.

Dirty Acres, and I think this is actually pretty unique from what I can tell, does not have such a track. Only on the occasional few lines on tracks like the jaw-droppingly tight "K.K.K.Y." do they even hint at how skilled they are, but that track also contains the lines "Standin out like mount Kilimanjaro"

and "We rose like Lazarus, a miraculous feat", so I think I can forgive themselves of a little back-patting there. Not once do they really let their ego or other childish ramblings get in the way of their message, their story.

It's not entirely serious, though. The first half of the album seems to take a playful take on subjects that get discussed with appropriate gravity on the second half. "Wonderful" is a sickeningly sweet little love song that's half crude and half cute. It mixes in the odd bit of wordplay that the group has become so beloved for and provides an excellent change in emotional tempo from the first five songs. The entire album doesn't work to get any more serious or lighthearted as it goes on. It starts with "Never", a solemn spoken word monologue on race in rap that ranks somewhere between a stern lecture and a rant of crazed anger in terms of bitterness. From there, it lightens up more and more, before getting steadily more sober in the latter half. These shifts, akin to the brilliant ability displayed by Joseph Heller, keep you from falling too far on either side of your emotional pendulum, but keep you attached to each sentiment.

All these ways in which they can keep you from feeling too sorry or happy from them would mean nothing if they weren't saying something worth hearing to begin with. Like Sufjan Stevens, they seem to have set out to encapsulate an entire physical area of the in music. Their approach is elementally different, though. Instead of reading like a tourism brochure, painting beautiful pictures of local lakes, flora and fauna, they deliver in the style of bathroom graffiti. Dirty, direct, clever, and above all, unabashedly true. I pity Sufjan if he ever makes an album about or . It'll never be as real as this.

That's one word that sums up this entire album pretty well - real. When they rap about the ghetto, there's no hyperbolic cries for sympathy. They rap about selling out with a realistic metaphor that anyone can relate to, not with some holier-than-thou attitude toward signing a contract. Even when spitting the traditional "fuck the police" credo of rap through the decades, they keep it believable and true.

Things weren't always so down to earth for the group. Back only a few albums ago, they were more than happy to come up with whatever crazy fantasy scenarios they needed to come up with some nice lines. Dirty Acres marks their maturity and development into more adult people more dramatically than I have seen in any other artist. It might not all be for the best that they've lost part of their playful spirit, but it has let them put together this incredibly solid album that would have demanded too much steadiness and focus than their younger selves could have delivered.

Like all other rap music, this album can sometimes fall into a formulaic state, but these guys seem to have tapped into a formula beyond the level of other rappers. They produce a beat, usually based around samples and home-made instrumentation, then spit two or three verses around a sung verse, depending on how much they feel needs to be said. Most songs on the album fall into this pattern, but it proves to be a pretty wide open way to do things. Yeah, only occasionally do they mix things up with trading verses (like in "K.K.K.Y.") or constantly building non-stop lines (like in "Valley of Death")  - these departures marking some of the best tracks on the album - and sometimes the formula seems to be getting tedious, but the material is so quality that it's hard to fault them for it.

The last stretch of songs, beginning with the dramatic "Gun", seems to be the dramatic climax that the whole album builds up to. It's an unprecedented thing, to release a rap album that carries so much tension, foreshadowing and progression between songs, to be able to make the listener feel like something big is going to happen. On these last few tracks, each artist involved has the opportunity - and takes it magnificently - to let it all out, finally get everything they need to off their chest, before the big closer of "". The result is the bitter but relevant "Gun", the soulful yet sad "Dance for Me", the heartbreaking "Georgia", which refers both to producer Kno's home state and rapper Natti's mother, and "Things I Dream", a song that sounds like hip hop's equivalent to Radiohead's "Climbing up the Walls". The aforementioned "" is a wonderful ending, too, a bittersweet message of realistic fantasy that carries over the dream analogy but flips it around 180 degrees. It's got the talented Club Dub doing the beats, almost ridiculously buttery flow, and Kno going all David Bowie at the end.

This album is, for all intents and purposes, the Ghetto Gospel. It ranges in seriousness between a well written paper on suffering in impoverished areas and Trailer Park Boys (this is a huge compliment for you poor folks who don't know). It's powerful, emotional, funny and sad. Most of all, it's real. Buy it for all your Negro-sympathizing friends.