Alright what do we have here?

DOOM is basically the Aphex Twin of rap and I say that only on the condition that no one presses me to take the metaphor too far. His releases in this decade have been pretty infrequent and of varying quality - usually the quality is directly proportional to how much he actually appears in the project. His verses seem a little lazier since his prime, but the effortlessness with which he now delivers his trademark flows has its own appeal too. His production is still 100% on point and shows signs of experimentation and innovation even at this stage. So really whenever you hear about a new DOOM thing you mainly just want to know how many tracks on it he produced and how many he rapped over. And this one seems to have enough that we're gonna listen to it.

On the other side, we have Bishop Nehru, who is 18 years old and seems immensely talented and very serious about making good hip hop. He blew up among people who listen to at least one hip hop album older than him on a daily basis, but not really with anyone else. Like, people who still bump Illmatic and 36 Chambers and probably Operation: Doomsday, which came out when Nehru was two years old. In some ways it makes sense, but it still seems crazy that out of all the promised DOOM collaboration albums, this is the one that actually came out. So we'll see what the deal is here I guess. 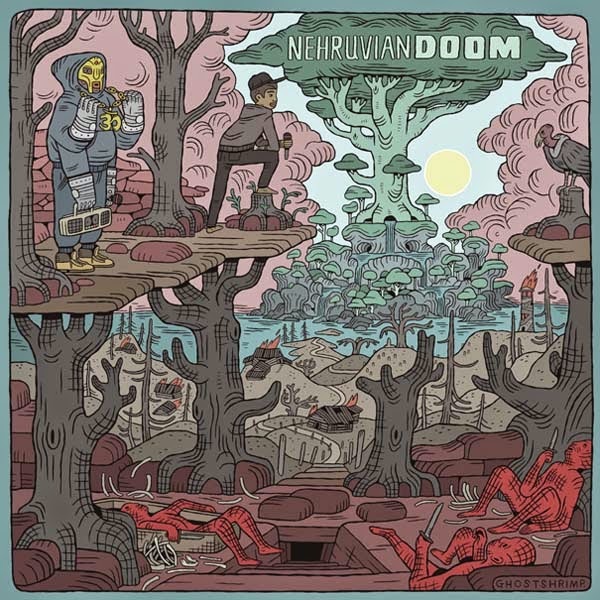 1. Intro
Ooh, this is already pretty nice. Radio voice talking about mantras... I see the aesthetic. Same with this sort of funky rhythm w/ samples and stuff. I think I see where they're trying to situate me, chronologically, geographically, emotionally. Doom loves to sample people laughing lol. I love that too. laughing ol. Nice intro.

2. Om
"Ommmm". Let's all try it together. Haha HERE HE IS. DOOM. damn. okay this is doom yes. Nehru doing adlibs over it is sweet. Nehru's verse here is really on point too. I can't keep up with these lyrics lol. I can understand them but I can't process them fast enough. So meticulously crafted. DOOM's flow is just as it show be. That sort of "extra word at the end to continue rhyme" I love. Nehru with hard real talk man. His flow is so on point... I think it's almost... uninteresting, it's too good, too perfect lol. Reminds me of what I've heard people say about Earl. But damn he's good. The juxtaposition of these samples at the end is funny lol. S+

3. Mean The Most
ahahaha this beat is slick. It has that awesome corny skeevy aesthetic that DOOM gets but it still bangs. loveraps. Nehru just flowing on and on here... sentimentality in music is so hit and miss for me, this is pretty good though. It's so straightforward lol. The horns on this beat lmao, I love it. This high pitched effect... is this still Nehru? Is it his Quasimoto form? Oh, the BEAT SWITCHUP, cool. But just samples over it? I guess this meditation lecture will be a theme. Oh ANOTHER BEAT SWITCHUP? cool. Doom does these sort of "sample suites" a lot, just various samples over various beats telling some sort of story that most people won't understand lol. I dunno what this one is about at all. He seems to have a fascination with these sort of like... i dunno what to call it... samples of like... poor communication haha. A+

4. So Alone
S A D B O Y S. oooh this beat is pretty smooth. again there's this intersection of like... a pastiche, or something. 16 man that's so young jesus. He seems so experienced. "In the end, all I really need is a friend", and then a hook of singing "so alone" wow man poor Nehru. He's so straightforward... the flow and rhymes are so calculated, but the emotional ends are so honest and simple. Well maybe simple is the wrong word idk... rap game Sun Kil Moon. hue hue hue. A

5. Coming For You
Magic message! A classic DOOM beat sorta feel here. Nehru going in of c, he has nowhere else to go. The vocals in the beat are really cool, that effect. Hey... does he not swear? I think he doesn't swear at all... is that true? He's so precise... "Can't be a mule, I was born as a jewel", such a determined attitude. S-

6. Darkness (HBU)
How about you? This is an interesting sorta beat... the vocal effects and the loops. Yeah, how bout you? I really like the horn man, this beat in general is TOTALLY sick. It has those DOOM drums, idk how to describe them. WOwwww the flow here is pretty nuts. So perfect. Okay yeah and the way he does another vocal track for the end of lines and makes them a bit disparate is really sick I want to see more stuff like that. maaaan I hope DOOM gets on this beat. okay no DOOM maybe but on this second verse Nehru is doing a really DOOM-esque flow, which is cool. I can't get over this beat though. it seems like a really ideal doom beat. Okay yeah at like 3:17, how do you describe those drums, that sorta truncated sound? Ooh a beat switch for the outro, this is nice too. Some British sampling?? What's this all about??? And sci-fi stuff obvs. Metal Fingers. S+

7. Caskets
DOOM! "lay in the cut like a puma on the prowl", damn, here we goooooooo. omg, he just did crazy things, he said and did crazy things. He's doing all sorts of DOOM tricks but it seems like he's doing them like he breathes i.e. totally naturally. Now Nehru. omg I hope they just trade verses back and forth for the whole track. I keep trying to catch Nehru swearing haha. "It's HORSE, I'm Jordan, it's 96", good line but lmao he wasn't even born in 96, I think, hahahaha. This verse is really nuts, he keeps reorientating it so he can keep going in. Lol and now the rapping over no beat, the ultimate form of "he went 2 FAR IN". ooooh this new beat is cool. but again probably just samples... so many great beats, I wish I could hear all my favorite rappers over them. "It is not possible for things to get worse in a universe that is expanding" ??? ???. Is this... good advice?? Where could this come from?? S

8. Great Things
omg THIS BEAT. is SO COOL. DOOM. THE VILLAIN. yesss. wow man. this is so POSITIVE. This is pretty based. Straightforward positive declaration of ambitions. "they treat me as feldspar" HAHA WHAT? i get it but like WHAT? Nehru are you crazy? If I was more of a backpacker he'd be my favorite rapper I bet. DOOOOM. damn man, plasma in the reactors, yup. This is just good advice man. Just do things. Do things you want to do. And stuff. "Beware of apathy and procrastination", doom, man, listen to yourself. and make madvillainy. And doomstarks. PLS. and one with Thom Yorke too. Beat freezes during a verse are always hype. This is pretty infectious. I am singing along with the hook despite this being the first time I heard this. *

9. Disastrous
Nehru REALLY is starting to sound like DOOM lol. This sort of flow man... he like coached him through this verse I swear. This beat is solid too. More positive good advice. DOOM HIMSELF, going in with a different sort of flow sorta. wow damn fukashima reference, yeah okay I guess. and Malaysian airlines too haha. "That's it, nothing come after this", and yeah it seems that way. More Om type stuff. Cool. And samples from Nehru's namesake movies. S

Alright that was a good time

I hadn't listened to an album like that in awhile. And I hadn't listened to a new album like that in even longer. And I hadn't listened to a new rapper who makes music like that in... geez... a very long time. Lately I've been listening to hip hop where a big part of the appeal is that it sounds completely effortless. Stuff like Young Thug or Yung Lean (did you know Yung Lean is a month older than Bishop Nehru?) sound like every line is coming from a place of immediacy, of emotional necessity... every word sounds like the only word that could work. Not the best word, chosen after considering every or even multiple words that could work, but the only way they could express themselves.

This is the sort of quality I generally want to have in music, but that isn't the case here. These guys speak with a much more deliberate articulation. Well, it's strange... DOOM almost sounds now like this is just how he thinks and speaks. Like there's a naturalness to even his most obscure or clever lines, and he really does seem like the type that would have these sort of things just occur to him. But, even then, the ideas he's working with are pretty like... nuanced? Abstracted? Like, there's not much immediate emotional energy behind them.

And conversely, we have Bishop Nehru, who also is extremely articulate, but here it seems like he's putting in work. You can hear the sound of meticulous goal-oriented revision on his verses. Here, though, it is to an end of immediate emotional energy. Something like "All Alone"... he has that feeling of loneliness, he sets out to write a verse that captures it as best he can, and it's something he works at. Whereas DOOM is more like... he has some general subject he wants to talk about and then he says a bunch of clever things that come to mind.

Okay but where they're united is something that matters way more than the tryhard/effortless dichotomy. It's the gift/showoff dichotomy. This is the one that actually matters to me. No matter how clever they're being, DOOM and Nehru are never making an effort to show how clever they are. The cleverness and articulation is a means to convey ideas and emotions. It's never just to convince the listener of how clever they are. This is the primary sin of Donald Glover in my eyes, but he's getting better about it.

But yeah so as long as I have that sense, the sense that it's about making the listener laugh and think and vibe out, the sense that it's still about the music and not about the IQ of the rapper, this sort of music still holds a lot of appeal to me. And the production is seriously tight on this, classic DOOM stuff, the verses are all super solid and full of interesting lines, and the straightforward messages of friendship and ambition manage to feel true, reassuring instead of trite, meaningless. Good stuff.
Posted by Keatsta at 8:45 AM

I want to know more about these lectures that are sampled .Can you help?