Hi wow it's been almost a year since the last blog post! What have you been doing?

Overall it is OK. Sometimes stressful but mostly peaceful. Sometimes I really feel like I absolutely have to stop working as soon as possible but the feeling passes and then I remain and it seems like that could just go on forever. I've remained for one entire year as of today, 246 working days. Like almost every office job, there's some downtime, during which I wrote this diary: 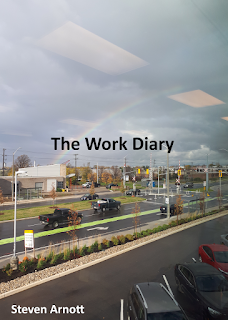 The cover is a picture I took out the window near my cubicle.

Yeah, it adds up. You might think that this means I was either neglecting my work or didn't have much work assigned to me, but I think I'm fine in both those areas and it's more just that finding a few minutes here and there to write whenever you can ends up being a lot of words after a year. I'd typically "check in" with it whenever I was between tasks and didn't have anything immediately urgent, just to record any thoughts or feelings I had at the time. It doesn't really have much of substance in it. And it isn't that long I mean it wouldn't even make the Wikipedia list of longest novels so whatever.

So why did you do it at all?

Oh, who knows. I sorta wanted to make a counterpart to the NEET Diary, to see what changed in myself between these two eras of my life, salaryman and NEET, but outside of the shift in subject matter I seem to be roughly the same person. I use the same sorts of language, the same thought patterns, I have the same areas of interest. It is basically more of the same, just now about different stuff. So if you liked the NEET Diary, here's some more. It gets pretty personal at times but I don't think it warrants the same level of "this is actually disgusting" disclaimer that the NEET Diary had.

For as long as I can remember, I've wanted to write, and the biggest thing that has always terrified me about getting a full-time job is that I would write much less or eventually stop. I think working on something like this was partially an attempt to feel like I was still writing, that I was still expressing myself creatively... but of course the writing that I want to do is more than this, it's fiction or at least substantial non-fiction essays, something with a definite value and possible legacy, not just endless rambling with an insight or phrase every dozen pages that I could feel proud of. Ideally I'd like to write things that could be published, that many people would read, that I could be paid for, that I could be paid for such that I could not have to work and just write for a living. That's the dream, and it has advanced very slowly since I got a job. I feel miserable about that, but not as miserable as I'd be if I didn't have this.

I dunno. I get some creative fulfillment from my Youtube channel too, of course, which has been growing nicely this whole time, and which I usually prioritize over writing when I have free time, for better or worse. So I'm not sure what actually is doing the most to alleviate my creative frustration, between the constant word-spam of this for almost no one, the constant rambling on camera for a small fanbase, or the infrequent attempts to make something that could eventually reach a much larger audience than either.

Really probably the answer is that I have some form of hypergraphia and that this helps sate it.

Check back next year for volume 2, and hopefully there's some other books before then. I have yet another book of short stories that's """"""almost done"""""" so maybe we'll see those soon.
Posted by Keatsta at 2:21 PM