Yes, after a long wait, Soft Weight is here. It's a collection of six new stories. Here is the cover: 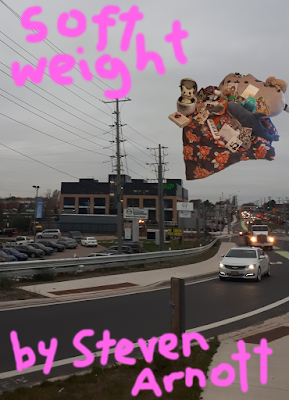 The picture is one I took of my office on a grey day, with a "physical collage" of various things I bought emerging from approximately where my cubicle is.

Here are little breakdowns of each story:

Season of Death - I released this in November last year as a "single" so maybe you've seen it. I've used these characters a couple times before. I wanted to express my feelings about something that happened last year, but I couldn't really, so I tried looking at it from a different perspective.

Face of God - I wrote this I think mostly in response to seeing the movie It and trying to capture all the parts of it I liked best. Kids on bikes and nostalgia and such. My childhood was actually nothing like this so I hope it seems authentic regardless lol.

Known Stranger - This is a little one based on a phenomenon I think is interesting. I went in a neurotic sort of direction, which I am often wont to do, but I want to write something more "normal" about this idea in the future.

Rumbling Silence - A big long one that all came from thinking of one particular line that a character shouts near the end. I wanted to just "encase" that line properly, but it ended up becoming much huger and more ambitious. The title comes from a concept I learned about in a Levinas book.

LDNReconciliation - A new story about my oldest and most familiar characters, Alice and Ume. I think soon I should try to collect all the "loose" stories I have with them and finally make the true "LDN". I started writing this very excitedly and fluently but the last 20% of it was very difficult.

Winter Melody - The final part of a series of stories that appears in each of my previous short story collections. I've come to really like these characters so prolly they'll come back in some form. This is definitely the most ambitious thing I've ever tried writing. I get big ideas for things I'd like to see, and I get ideas for things I can actually write, and for the first time I dragged the former down into the world of the latter. It fought the whole way. It wanted to remain in the perfect world of unwritten dreams. It was very comfortable there. But I did it, I finally actually did it, and the hope it gives me for many other half-abandoned big projects is revolutionary. I think this is my favorite thing I've ever written, I really hope you like it too.

This is my fourth short story collection, after LMAX, Hot Summer, and 魔塵鬱圏. After each of these I had intended to write something more substantial, but the short story collections are more fun and much easier. Not easy, but easier - finishing this has been a really significant struggle. This is my first release in over a year, my first one of 2018, and the first collection of things I'd made entirely since I started working full-time. This is not a coincidence. My job has been a major impediment to fiction writing (non-fiction writing has remained fruitful, lol). When I get home I have to hit the perfect combination of motivated, awake, focused, and free to attempt writing, and even then sometimes I can't start hitting any sort of flow state before it's time for bed. Things like streaming myself writing were often successful in keeping me more focused but still required the right opportunity. And plus now my Youtube channel is gone ;_; so that option isn't available to me. Weekends are precious short and often gobbled up by a variety of social obligations or chores or indulgences.

The progress of working on it was something like this: 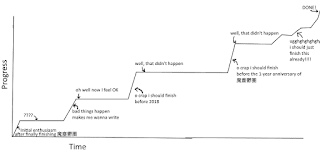 The periods of progress were difficult: I had challenges prioritizing things and I started resenting everything else that dared demand my time and energy, especially my job. But the real problems, of course, are the big plateaus where I'd just be doing other things and not even thinking about writing. I can't really explain why. Looking back at my motivations, it seems more like I'd have to make some feeling of significance or obligation to get myself to work, and that the default state was actually not working, not caring. Sometimes, like when I look at my diaries, or I consider how much I think about stories and characters and such, I think I have some sort of hypergraphia-like condition. But really maybe I don't care, and I just want to care and try to care, or maybe I'm growing out of caring, or something.

Haha just kidding not really. I can't actually believe that. Even if I was going to commit to some sort of new lifestyle plan, a life of "mainstream happiness" without "creative fulfillment" (and I have been considering things like this) I know that I would have to have some "finale" first, and that it would get postponed and replaced, always a more fitting finale would come to mind, and I'd never actually stop. So why even pretend? Even if I keep releasing things slower and slower, even if they get worse and worse, less and less ambitious, readership shrinking beyond the zero, I'd still keep going. I really believe that.

But I also really want to believe that I'll actually improve and accelerate. Now that my Youtube channel is on hiatus, I have a lot more free time. Unfortunately (?) I've wasted (??) a lot of that time at the gym (!!?!) and I don't want to stop doing that either (!!!??!?!?). In 2019 I want to go back to making lots of videos too, so uhh. Unsure how I figure this is all going to add up. Oh well. I make the same sorts of complaints and promises at the end of all these release posts. It's just how it is.